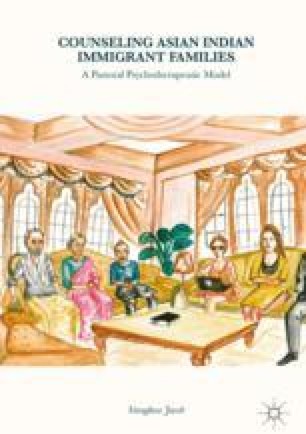 Historical and Cultural Factors in Ethnic Identity Formation of Asian-Indian Immigrants: Understanding the Context of Care

This chapter sets the stage for the development of a model of pastoral psychotherapeutic care that fits the needs of Asian-Indian immigrants in the United States of America, based on an understanding of a fuller picture of who they are and how they have come to be who they are. I explore the complex cultural identity of Asian-Indians based on their cultural values, belief systems, and lifestyle, while trying to delineate some of their fears, including a sense of isolation, they may experience while they are living in the United States. I also explore how Indian immigrants respond to the unique stress of immigration and try to reshape their lives in the United States in the midst of various post-immigration challenges and struggles. Asian-Indians warrant separate research and exploration since their culture is distinct from other Asian groups. Asian-Indians are, however, a heterogeneous group in themselves. Parmatma Saran states that each regional subgroup of India has its own unique history, practices, languages, values, and customs. Yet, there are many cultural beliefs, values, and practices related to family, marriage, child-rearing, and community in common among Indians. This chapter discusses those common cultural values, beliefs, and practices. Hence, the term “Indian culture” in this book only refers to those common cultural values. Highlighting the importance of Asian-Indian traditional culture or the cultural context of Asian-Indians neither negates the reality of the good and positive elements that come from other cultures nor does it claim that the best is only found in the traditional context. Attending to cultural assumptions of Asian-Indians allows us to understand the important role these play in formulating and providing informed care.