The Medicalization of America's Schools 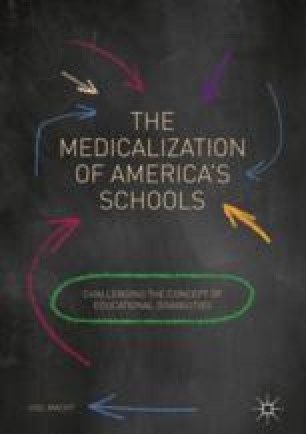 The Medicalization of America's Schools pp 81-202 | Cite as

ADHD’s emotive controversy is revealed. The account of a documented nineteenth-century case, which is used today as definitive confirmation of ADHD’s viability, ignored anobvious variable that influenced the observed children’s inattentiveness, raising serious doubts about the medical model's explanation for the children's restless, distracted behavior. The chapter explains why research fails to support claims that ADHD is biogenetically caused. It reveals that ADHD, without biological markers, cannot be authenticated. Diagnoses are dependent on subjective data provided by teachers and parents who may be biased toward substantiating the disorder to receive sought-after benefits. Where it was once thought that ADHD was diagnosable based on the effects of stimulant medication, it is now known that virtually any child receiving low-dose stimulants will demonstrate improvement in attention to task. ADHD is shown to be a social construct, and not a bona fide, verifiable disorder.

Attention Deficit Hyperactivity Disorder (ADHD) Children And Adults With Attention-Deficit/Hyperactivity Disorder (CHADD) National Institute Of Mental Health (NIMH) ADHD-like Behaviors Minimal Brain Dysfunction Syndrome (MBDS)
These keywords were added by machine and not by the authors. This process is experimental and the keywords may be updated as the learning algorithm improves.
This is a preview of subscription content, log in to check access.