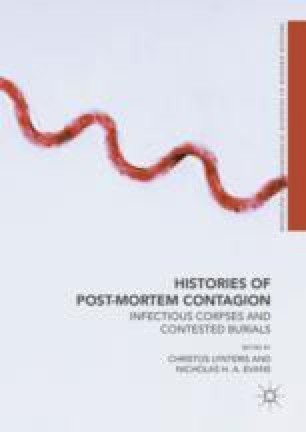 Shrouded Corpses, Walking Cadavers: The Shifting of ‘the Choleras’ in Depictions of Southeastern Captivity

Presenting rare photography from camps on the Thailand–Burma railway, this chapter traces the spread and treatment of cholera in captivity during World War II through to its post-war depiction in second-generation fiction. Analysis of visual depictions alongside the diaries, memoirs, and medical reports produced by former PoWs and their medical officers shows that whilst cholera created social isolation among a group of already segregated men, fighting the disease also necessitated the development of ‘communities of care’. This chapter also explores the profound connections that formed between the sick and those that cared for them. It concludes by illustrating how the diseased body and the figure of the medic have become central motifs in post-war depictions of the Thailand–Burma railway, thus enabling the social experience of disease to communicate the personal story of captivity.

Thai Burma Railway Capture Memory 11M cAMP Deep North Cholera Epidemics
These keywords were added by machine and not by the authors. This process is experimental and the keywords may be updated as the learning algorithm improves.
This is a preview of subscription content, log in to check access.

The author would like to thank the editors of this volume for their support and encouragement throughout the drafting process. Particular thanks must also go to the family of Ray Parkin, and to Pattie Wright, for kind permission to reproduce Ray Parkins’ ‘Two Malarias and a Cholera’. This work was supported by a LHRI/Wellcome Trust ISSF post-doctoral fellowship.