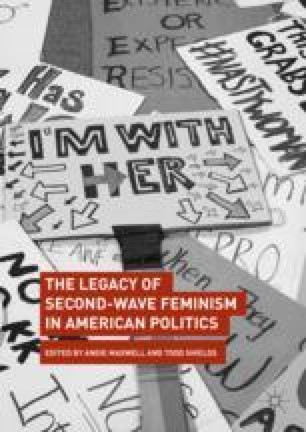 “No More Silence!”: Feminist Activism and Religion in the Second Wave

Similar to the political goals of Second-Wave feminists, proponents of feminist theology, which also surged in the early 1970s, sought to establish leadership roles for women in the church and end “patriarchal religious hierarchies.” In this chapter, Laura Foxworth examines the complex relationship between Second-Wave Feminism and the ongoing struggle for equality within American religious institutions. Although the National Organization of Women (NOW) created a task force to explore the relationship between feminism and organized religion, Foxworth notes that it was rarely utilized and its influence was limited. Frustrated with their lack of progress, many women, contends Foxworth, sought religious expression outside of the church. The result was an expansion of “woman’s spirituality” and an elevated understanding of the female divine in the absence of male presence. Other moderate feminist reformers who remained inside the church, advocating for equality within traditional religious practices, faced specific opposition to the Equal Rights Amendment (ERA). Foxworth explores how religious leaders, both male and female, often argued that people of faith should oppose the ERA, particularly in the South where opposition to both feminism and the ERA was often the strongest. Phyllis Schlafly and other popular leaders of the emerging “Religious Right,” for example, quoted various Bible verses to support their opposition to the ERA. Foxworth concludes that while Second-Wave feminists primarily fought to create secular equality, they inspired a powerful movement within religious institutions as well. Though the lasting influence of Second-Wave Feminism remains the growing numbers of women who are ordained in many denominations, as well as the increased leadership opportunities for women of faith, the level of inequality in the contemporary church remains incredibly high.

Phyllis Schlafly Equal Rights Amendment (ERA) Female Divine Second-wave Feminism Religious Liberalism
These keywords were added by machine and not by the authors. This process is experimental and the keywords may be updated as the learning algorithm improves.