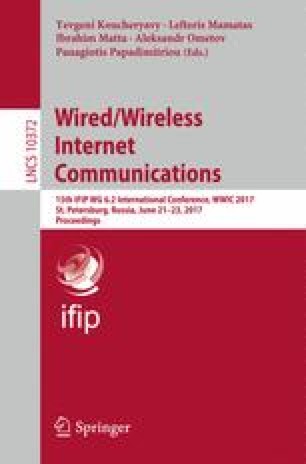 Shopping malls are characterized by a high density of users. The use of direct device-to-device (D2D) communications may significantly mitigate the load imposed on the cellular systems in such environments. In addition to high user densities, the communicating entities are inherently mobile with very specific attractor-based mobility patterns. In this paper, we propose a model for characterizing time-dependent signal-to-interference ratio (SIR) in shopping malls. Particularly, we use fractional Fokker-Plank equation for modeling the non-linear functional of the average SIR value, defined on a stochastic fractal trajectory. The evolution equation of the average SIR is derived in terms of fractal motion of the tagged receiver and the interfering devices. We illustrate the use of our model by showing that the behavior of SIR is generally varying for different types of fractals.

The numbers of hand-held devices have dramatically increased over the past decade [1] followed by a tremendous traffic growth brought along by the emerging spectrum consumers [2]. This trend is expected to be continued towards new growing markets of wearable electronics that integrate into the next generation (5G) communications paradigm [3, 4] and embrace direct device-to-device (D2D) connectivity as part of it [5]. At the same time, International Telecommunications Union (ITU) has recently provided 5G requirements including several novel scenarios [6] and offered some considerations on the mobility support [7].

While the communications quality in conventional outdoor scenarios could be improved by increasing the density of wireless infrastructure nodes [8], the indoor case is much more sensitive to wireless interference [9]. It is particularly important for the enclosed offices, corridors within their premises, and shopping malls [10]. The typical environments of this type could be described as cubical areas with different sizes where the user movement is fairly predictable [11, 12].

The mobility pattern of a user in the indoor premises depends on a number of factors dictating the movement trajectory, that is, it is not an entirely “random” process. A typical example of the corresponding mobility model could be described as a relatively slow movement of users inside the shops and faster movement between them. Similar behavior is observed in the dynamics of fractal sets, see, e.g., [13, 14]. The analysis of stable connectivity between mobile devices in such a scenario could be considered as a challenging task in the context of 5G communications systems [15, 16, 17, 18].

A conventional way to study the performance of wireless networks is to utilize the tools of stochastic geometry. According to this approach, the locations of communicating entities are represented by employing a static spatial point process. The metrics of interest, such as the signal-to-interference ratio (SIR) moments and distributions, are then obtained by analyzing the distances between a receiver, a transmitter, and other communicating stations [19, 20]. This approach is however limited to static time-averaged measures. At the same time, accounting for the fact that communication sessions are always of finite durations, time-dependent metrics are often of interest.

In this work, a model for analyzing the dynamics of the connection quality indicator, the so-called SIR, is developed. We consider the case, where the movement of transceivers is considered as a set of paths that are random on a fractal set process. The proposed model is a representative abstraction for the aforementioned office or shopping mall scenario, where the fractal set represents the attraction points of a shopping mall (specific areas inside the shops). The analysis is based on the Fokker-Planck equation with fractional spatial derivatives. The model considers the distribution of coordinates for the receiver, the transmitter, and the interfering stations, as well as the level of mobility, and translates them into the average SIR evolution in time. The use of fractal sets allows to explicitly include the effects of spatial movement correlation thus adequately representing the real-life scenarios. We illustrate the application of the proposed model and demonstrate that the behavior of SIR is generally varying for different types of fractals, that is, spatial correlation of the movement process.

The rest of this work is organized as follows. The system model, metrics of interest, and SIR trajectory modeling are introduced in Sect. 2. The formulation for the time evolution of SIR is derived in Sect. 3. The numerical results and the conclusions are drawn in the last section.

In the following sections, we study the dependence of the mean SIR value, when the mobility trajectories are samples generated from the distribution evolving according to (8).

The typical movement trajectories in the example obtained for the fractal walk on a two-dimensional ternary Cantor set are shown in Fig. 1(a). The modeling algorithm is described in [17]. As one may observe, the mobility process of users comprises many short travels around the attractor points as well as occasional long-distant movements. This process closely resembles the basic properties of real measurements of user mobility in shopping malls, see, e.g., [24].

The associated SIR trajectory produced by using (13) for a randomly tagged receiver is shown in Fig. 1(b). For this illustration, the number of interfering stations, N, was set to 100. Note that the autocorrelation being a result of spatial correlation caused by a fractal set is clearly observed.

3 Formulation for Evolution of Average SIR

Despite the complex structure of (21), it still provides a possibility to make qualitative conclusions regarding the contributions of each component. In the scenario with \(\alpha = 1\) in (8), there is an interesting special case of the so-called zero-flow average SIR. Recall that in the classic Fokker-Planck equation, the term \(f(r,t)u grad\big (\frac{\phi }{U}\big )\) after integration over the region of interest represents the drift. Here, the term \(\frac{\phi }{U^2}div (J)\) corresponds to the similar effect, but it affects the average field U(r, t). These two terms have different signs, i.e., the total transport effect of the drift \(u\nabla \frac{\phi }{U}+\frac{\phi }{U^2}div(J)\) after integration with the density f(r, t) might be negligible, e.g., the average scalar product of the drift and the radius-vector ur is equal to zero. In this case, the SIR changes are due to the diffusion effect only.

The result in (21) offers an opportunity for faster modeling of the average SIR values. In our numerical illustration, we consider two empirical density functions corresponding to two various Hausdorff dimensions of the fractal sets, Cantor square with \(2\alpha _1=\ln {8}/\ln {3}\) and Sierpinski triangle with \(2\alpha _2=\ln {3}/\ln {2}\). As one may observe in Fig. 2(a), these functions exhibit drastically different properties.

The average SIR values for the sample lengths of 100 are demonstrated in Fig. 2(b). The number of interfering nodes in this example is \(N=10\). Note that the Cantor fractal results have much more variability implying that an appropriate choice of the underlying model is of paramount importance.

In this paper, starting from the kinematic equation that describes the evolution of the coordinates density of users, we obtained the equation for the time evolution of the average SIR value experienced at the receiver of interest that moves in a field of N interfering stations. The proposed formalism allows to address a wide variety of specific movement patterns including non-stationary ones. We then proceeded with obtaining the kinematic equation for the average SIR value. The resulting expression, although being complex, can be solved in special cases of interest, e.g., when the stationary density of the coordinates is considered. However, even in the general case of non-stationary movement, it allows for the qualitative assessment.

Our numerical illustration highlights that the average SIR evolution is drastically affected by the choice of the fractal set. One practical problem emphasized by our study is to determine the appropriate value of \(\alpha \) for different environments. In realistic scenarios, i.e., for applications in shopping malls, stadiums, etc., there is not only non-zero time-dependent drift corresponding to e.g., a lunch break or other intermissions when the flow of people changes significantly, but also specific collective effects with non-local interaction.