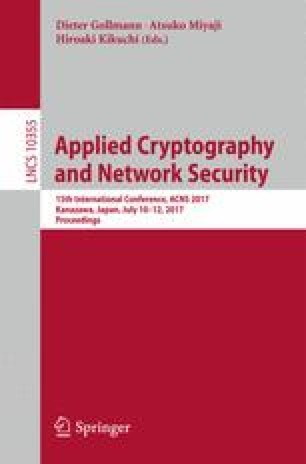 The goal of this work is to explore the effects of visual stimuli on the performance of security-critical tasks. To this end, we experimented with a large number of subjects who were exposed to a range of unexpected visual stimuli while attempting to perform Bluetooth Pairing. Our results clearly demonstrate substantially increased task completion times and markedly lower task success rates. These negative effects are noteworthy, especially, when contrasted with prior results on audio distractions which had positive effects on performance of similar tasks. Experiments were conducted in a novel (fully automated and completely unattended) experimental environment. This yielded more uniform experiments, better scalability and significantly lower financial and logistical burdens. We discuss this experience, including benefits and limitations of the unattended automated experiment paradigm.

Bluetooth Pairing Security-critical Tasks Unexpected Visual Stimuli Audio Distraction Task Completion Time
These keywords were added by machine and not by the authors. This process is experimental and the keywords may be updated as the learning algorithm improves.
This is a preview of subscription content, log in to check access.

This research has been supported by NSF Grant CNS-1544373.

We considered potential differences in failure rates between subjects who performed the task alone, and those who did it as part of a group. As mentioned in the discussion of Data Cleaning, for each group, we only consider the initial participating group member, referred to as the Group Initiator. As Table 9 shows, there is no significant difference between failure rates of individual subjects and Group Initiators; Wald Statistic = 0.34, Nuisance parameter \(= 0.01\), \(p = 0.51\). Furthermore, as Table 10 shows, a pairwise t-test of completion times for individuals – compared to group initiators – shows that observed differences are not statistically significant; \(t(84)=0.09\), \(p = 0.93\).

The Munsell Color System is used for creating and describing colors. In it, all colors are grouped into two categories: primary and intermediate hues. Primary hues include: Red, Yellow, Purple, Blue, and Green, arranged in a circular shape as in Fig. 3. Intermediate hues are mixtures of two adjacent primary hues, such as Yellow-Green or Purple-Blue. Colors are defined on three dimensions: hue, lightness, and color purity. The Munsell system is based on human perception which makes it useful for rigorously defining human reaction to specific color forms. However basing the system on human perception makes the Munsell system a poor tool for direct conversion of light described by its physical wavelength into human-perceptible color.

The Phillips Hue bulbs use the CIE color space. In CIE, colors are defined as a 2-dimensional space with X and Y values moving along a roughly triangular curve that corresponds to the translation of wavelengths of light to their human perception in the visible spectrum. The exact color range of the Philips Hue bulb is shown in Fig. 4.

Figures 5, 6, 7 and 8 provide additional details about our experimental setup.