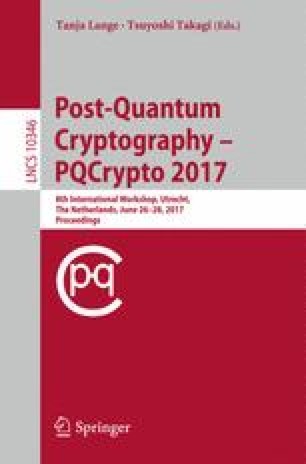 Author list in alphabetical order; see https://www.ams.org/profession/leaders/culture/CultureStatement04.pdf. This work was supported by the Commission of the European Communities through the Horizon 2020 program under project 645622 (PQCRYPTO), by the U.S. National Science Foundation under grants 1018836 and 1314919, by the Netherlands Organisation for Scientific Research (NWO) under grant 639.073.005, by NIST under grant 60NANB17D184, by the Simons Foundation under grant 430128; by NSERC; by CFI; and by ORF. IQC and the Perimeter Institute are supported in part by the Government of Canada and the Province of Ontario. “Any opinions, findings, and conclusions or recommendations expressed in this material are those of the author(s) and do not necessarily reflect the views of the National Science Foundation” (or other funding agencies). Permanent ID of this document: d4969875ec8996389d6dd1271c032a204f7bbc42. Date: 2017.04.19.

A Number of Iterations for the Serial Construction

We abstract and generalize the situation in Section 6 as follows. The algorithm state evolves through t iterations: from state \(S_0\), to state \(S_1=A_1(S_0)\), to state \(S_2=A_2(S_1)\), and so on through state \(S_t=A_t(S_{t-1})\). We are given a positive real number p and a guarantee that each iteration is successful with probability at least p. Our objective is to put an upper bound on the chance that there are fewer than s successful iterations.

Let A be a random function from X to X. (This will be what the algorithm does in one iteration.) Note that “random” does not mean “uniform random”; we are not assuming that A is uniformly distributed over the space of functions from X to X.

Define A as admissible if the following two conditions are both satisfied:(In other words, no matter what the starting state S is, an A iteration starting from S has probability at least p of being successful.)