The French Revolution and Religion in Global Perspective 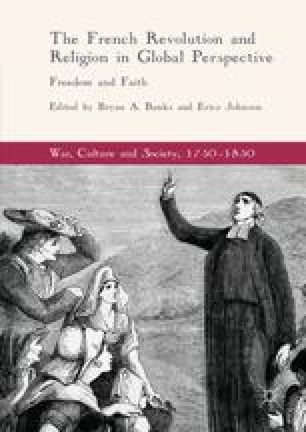 Religion and Secularization in Bavaria in the Age of Revolution, 1777–1817

Ottosen’s article examines the process and impact of secularization and religious reforms in Bavaria across three decades of revolution and upheaval. It traces the origins of the reforms as well as how they were implemented, and questions the extent to which they can be attributed to the impact of the French Revolution. In doing so, the article questions whether the Revolution marked a point of departure for Bavarian reformers or rather provided a context in which Bavarian reform ideas that predated it could be successfully implemented. Moreover, the article assesses the relationship between spiritual and political, legal and social considerations on the part of the Bavarian government in implementing the reforms, as well as how secularization and religious reform were experienced by the common people.

Cite this chapter as:
Ottosen M.N. (2017) Religion and Secularization in Bavaria in the Age of Revolution, 1777–1817. In: Banks B., Johnson E. (eds) The French Revolution and Religion in Global Perspective. War, Culture and Society, 1750-1850. Palgrave Macmillan, Cham