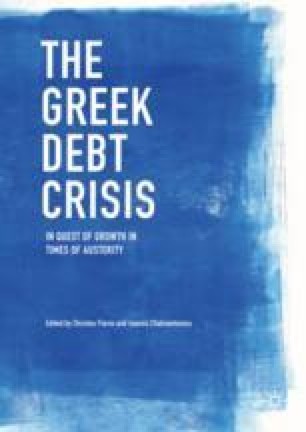 When Did It Go Wrong? The Case of Greek Sovereign Debt

This chapter analyses the fiscal stance of the Greek public sector over the period 2001–2016. It distinguishes between three periods: 2001–2006, during which the Greek economy attained much larger growth rates than most EU countries but despite that the general government primary deficit was on average about 2 percentage points higher than the EU-28 average; 2007–2009, during which the primary fiscal deficit soared, reaching a record value of 10.1% in 2009; finally, 2010–2016, during which the Greek economy entered a long phase of fiscal consolidation and by 2014 the fiscal budget even experienced a small primary surplus. What factors contributed to more-than-average (relative to the EU countries) fiscal imbalances during the first phase, in spite of high economic growth? Was the 2009 fiscal deficit revenue or expenditure driven? How was fiscal consolidation achieved during the last phase? What implications does this bear for future economic growth rate and the ability of Greece to pay back its debt? The chapter concludes by providing some recommendations for future fiscal policy making and the way ahead.

In this way, we can disentangle the relative importance of three factors in debt accumulation, namely (i) primary balances, (ii) the interest rate component, i.e. the portion of debt accumulation that is due to the interest rate on existing debt being larger that the growth rate of the economy, and finally (iii) the effect of stock-flow adjustments. The latter captures any changes in debt level that are not due to the previous two factors. 10

Even further, details on this approach can be found in Manessiotis and Reischauer (2001, Appendix 2).