Human Interface and the Management of Information: Information, Knowledge and Interaction Design 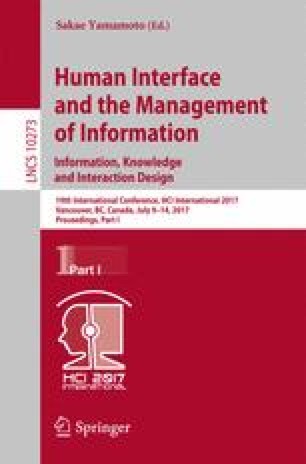 HIMI 2017: Human Interface and the Management of Information: Information, Knowledge and Interaction Design pp 103-111 | Cite as

This research aims to achieve the resident-centered community design by utilizing information and communication technology (ICT), and to create a trigger to regain rich relationship within a community by visualizing media spots which is defined as places where residents communicate much more than the other areas. In order to improve the media spot estimation method proposed by the previous research, we extracted and analyzed location information under various conditions. As a result, we could confirm that a portion of the highest density of location information corresponds to a resident’s home place, and found that a home place can be accurately derived irrespective of the scattering in accuracy. Also, the analysis on how the distribution of location information varies depending on time zone suggests that it is necessary to use location information which is minutely divided in time or aggregated every day of the week.

Local Information Analysis Median Spot Home Place Time Zones Experimental Cooperators
These keywords were added by machine and not by the authors. This process is experimental and the keywords may be updated as the learning algorithm improves.
Download conference paper PDF

The structure of local communities in Japan has needed to change after the Tohoku Earthquake. Japan is the first country to have a super-aging society, first noted in 2007. According to the latest Annual Health, Labor and Welfare Report, on the other hand, the connections has been weak among members of the communities, but the number of people who want to help in the community has increased [2]. That is, local communities need to be vitalized for the regaining relationships.

This type of social situation has prompted the development of several approaches from the computer science field. For example, the Strategy Proposal of 2012, the Japan Science and Technology Agency includes the person-watching system for the elderly and smart city system are examples of these approaches [3]. Despite the need for these approaches in many communities, most communities cannot use them casually.

The research on “constructing” the system has been successful, but that on its “usage” is in the developing stage. Moreover, the introduction of the system does not always guarantee local activation, which always depends on the locals who will notice their problems and act to solve them. If residents can be aware of their invisible relationship that they are usually unconscious, and if they understand its importance, they could vitalize their community through sustaining and promoting it? That is the concept of resident-centered vitalization of local communities.

This research aims to achieve the resident-centered community design by utilizing information and communication technology (ICT). We defined “media spots” as places where residents communicate much more than the other areas. As a place for creating and strengthening relationships, we visualize media spot and create an opportunity to regain relationship within the community. In this research, we have been considering a method of estimating media spots using location information acquired by smartphones. In this paper, in order to improve the media spot estimation method of the previous research [1], we extracted and analyzed location information under various conditions.

2 Resident-Centered Vitalization of the Local Community

Ushino’s research (1982) on local resident-based regional development has explained the importance of such concept and proposed a system called “Kande System” [4]. Ushino has said that after the industrialization and urbanization in the 1950s, the village communities in the rural areas are divided by the agricultural policy and then re-integrated in the 1970s to create a new regional system. The importance of local resident-based regional development has already been a significant research topic since the 1980s.

Meanwhile, Yoshizumi’s case study (2013) has analyzed the way for locals to develop regions sustainably and suggested the “Eco Card System” [5]. In this system, the locals are given a stamp card called “Eco Card” that promotes environmental activities, thereby creating a setup for the locals to be involved in the region. This system highlights the importance of visualizing or making the locals notice the problems for them to manage local resident-based regional development.

We acquired residents’ activity data with smartphones lent to them in the Makishima area in Uji City, Kyoto, Japan, in cooperation with members of the non-profit corporation Makishima Kizuna-no-Kai. Activity data means “location information,” “send and receive emails,” “telephones reception and transmission” and “passing-each-other data from Bluetooth [6].” In this paper, we analyzed “location information” to improve the media spot estimation method.

This field experiment has been conducted in the Makishima area in Uji City, Kyoto, Japan.

Uji City is located in the south of Kyoto on the south side of Kyoto City. The population of Uji City as of April 1, 2016, is about 190,000 and 15,000 (about 8%) of them live in Makishima area. Uji City has attracted lots of attention as a residential area near Kyoto, Osaka, and Kobe since the early 1960’s. As a result, residential land was developed in Uji City and the population remarkably increased. Makshima area is one of the development areas in Uji City, and there is a densely-populated area such as a housing complex. Blocks of the development area in the early 1960’s are aging, but the population of the whole Makishima area is slightly increasing.

Table 2 shows the periods of the field experiment. We instructed the experimental cooperators to use the lent smartphone at all times for the duration of the experiment. The location information was acquired every minute, except for the following situations:
Table 2.

Table 3 shows the specification of smartphones that are used in the field experiment.

Smartphones used in the first period (the right side of Fig. 1) were discredited mostly due to sluggish actions and small screen. Accordingly, we lent them stylus pens for the improvement of usability. This way partly resolves that discredit.

Following the suggestion of the first period, smartphones using the second and third period (the left side of Fig. 1) was chosen as quick action and big screen. Some of the experimental cooperators have his/her smartphone due to the spread of smartphones compared to the first period. That discredit is significantly resolved by these external factors also.
Table 3.

The two-dimensional (2D) location information (the point showing a position) consisted of latitude and longitude that recorded a person’s action at a specific time. The point that showed many positions at the spot where the person stayed in will be plotted, and then density would become higher. The part that is high in density appears as the maximum value. Subsequently, we derived the probability density function of this location information using KDE and then estimated the place where each person was usually found by counting the number of maximum value locations. The inspection of the hypothesis followed. A media spot was defined as the place where communication is active in an area. “Active communication” refers to the place where many residents gather in an area.

In the previous research, the media spot estimation method entailed the following steps:

In this paper, we analyzed the following points toward improving media spot estimation algorithm.

We also used Numpy and Scipy, which are libraries for high-level scientific calculations of Python for the inspection.

4 Results of the Analysis and Discussion

Aiming to achieve the resident-centered community design with ICT, we have worked on visualizing media expected as a trigger to enrich relationships within a community. In this paper, we focused on improving the media spot estimation method, extracted residents’ location information through their smartphones, and analyzed the location information under various conditions. We could confirm the following results by analysis of location information.

In the future, we will investigate the following to establish the media spot estimation method.

Through these investigations, we would like to achieve the resident-centered community design by establishing a media spot estimation method and creating a trigger to regain rich relationship within a community.

This work was supported by Grant-in-Aid for JSPS Fellows Grant Number 16J03602.