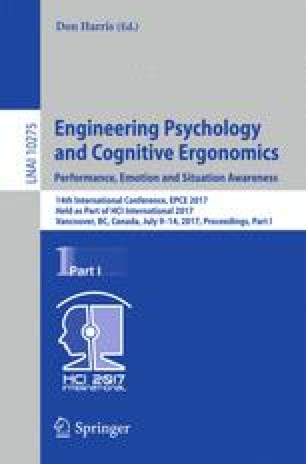 Digitization in the battle field enables the creation of new communication means among distributed elements. We aim to examine how the use of graphic imagery and means of graphic communication facilitate performance, shorten the OODA loop (Observe–Orient–Decide–Act), and enhance operators’ situation awareness. Previous research (Oron-Gilad and Oppenheim 2015) looked at bi-directional graphic communication on video feed derived from an unmanned aerial system (UAS), allowing a dismounted commander and the operator of the UAS to view and communicate on the video imagery. It was concluded that the commanders favored the ability to use non-stationary markings on the video feed relative to no markings at all or anchored-fixed markings. Furthermore, the verbal communication between the team mates changed as the team gained experience over consecutive trials, and with the use of graphic communication.

In the current study, we examined the added value of using still images, one-way, graphic communication from an operator, represented by Coral, tablet or UAS observers to a ground fighter, represented by either Tank (mounted) or Spike-MR (dismounted) attackers, while collaborating to acquire stationary targets in a rural built area. The abilities to communicate by using still images with or without additional markings (annotations) were aimed to be compared to a basic communication form based on ‘coordinates’ and to a future solution of augmentation of the target’s location on reality. Difficulties in accurately implementing the augmentation have severely hindered the accuracy of performance in this communication mean. Therefore, comparisons were made relative to ‘coordinates’ as a baseline and to the use of still images (with annotations or without). Verbal communication within the teams (two-way) was available at all times. Eight teams of three; ‘attacker’, ‘observer’, and ‘controller’ (as the higher echelon commander) participated in the experiment. Participant soldiers were assigned to a simulated work station according to their expertise. The dependent variables were (1) objective measures - execution, response time and accuracy, and (2) subjective evaluation of – usability, stress, and the quality of communication, and (3) verbal communication.

The results show that in the Ground-Ground teams, operators benefited from the use of still images especially in the time to acquire a target and the accuracy distance from target. In contrary, still images from the UAS were less beneficial to the ground operators relative to ‘coordinates’ in terms of time to acquire a target and executions. Overall, observer-type participants favored the use of still images. When they had free choice, they chose the still image configurations almost in all cases (98%). Yet, there were differences in the way the observers and the attackers perceived the quality of the graphic communication, and there were differences, between the mounted and the dismounted attackers as well. All in all, it seems that the addition of graphic communication increased the number of ping-pong chats between the team members, but, on average, shortened the duration of each chat. From the perspective of the controllers, who were supervising the teams, they noted that the Ground-Ground teams used less verbal communication compared to the Ground-Aerial teams. Furthermore, less verbal communication was required when using the still images interface (with or without markings) compared to ‘coordinates’.

Further investigation is needed to test the added value of using bi-directional graphic communication (either on still images or by temporary markings on dynamic video scenes).

This work was supported by the US Army Research Laboratory through the DCS subcontract no: APX03-S010 (B.G. Negev Technologies and Applications Ltd) under Prime Contract no W911NF-10-D-0002, Michael Barnes, Technical Monitor. This work was done in collaboration with the IDF Battle lab, Lt. Col Yaniv Minkov, Major Yisachar Shapira and Major Yoav Yulis. The work is unclassified, Approved for public release.

Cite this paper as:
Oron-Gilad T., Oppenheim I. (2017) Use of Graphic Imagery as a Mean of Communication Between Operators and Unmanned Systems in C3Fire Tasks. In: Harris D. (eds) Engineering Psychology and Cognitive Ergonomics: Performance, Emotion and Situation Awareness. EPCE 2017. Lecture Notes in Computer Science, vol 10275. Springer, Cham