Poetry and Performance During the British Poetry Revival 1960–1980 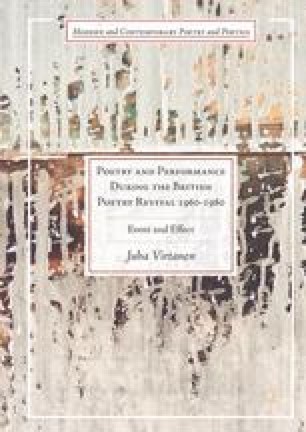 Virtanen puts forward a fresh and sustained examination of Eric Mottram’s collaborative project Pollock Record. Framing its analysis around the large sheets of poetic material that Mottram prepared for Pollock Record in the late 1970s, the chapter considers these collagist fragments in relation to the poet’s frequent use of found text, as well as the project’s interconnections with the ‘action paintings’ of Jackson Pollock. Virtanen demonstrates that Mottram might have originally intended to incorporate some of Pollock’s techniques to the performance of his piece. However, the chapter ultimately asserts that the event of performing Pollock Record shifts its focus from painterly procedures to a complex enactment of short-term memory that rejects the stability of documentation, and instead produces an occasion of cacophonous collective authorship.

Action Painting War Poetry forgettingForgetting Kaprow documentationDocumentation
These keywords were added by machine and not by the authors. This process is experimental and the keywords may be updated as the learning algorithm improves.
This is a preview of subscription content, log in to check access.