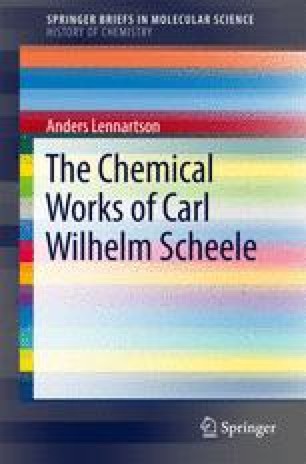 Scheele lacked formal chemistry education, and was restricted to rather simple equipment available in the laboratories of the pharmacy shops where he worked. Yet he made a very significant contribution to chemistry: he discovered or contributed to the discovery of seven elements, isolated a large number of new organic compounds and anticipated the discoveries of multiple oxidation states among metals, catalysis, pasteurisation, polybasic acids and much more. From his first publication to his death only fifteen years had passed, and by that time he was a member of a number of learned societies, and his work was frequently referred to by the important chemists of his time.

Organic Compound Oxidation State Significant Contribution Valence Electron Great Care
These keywords were added by machine and not by the authors. This process is experimental and the keywords may be updated as the learning algorithm improves.
This is a preview of subscription content, log in to check access.