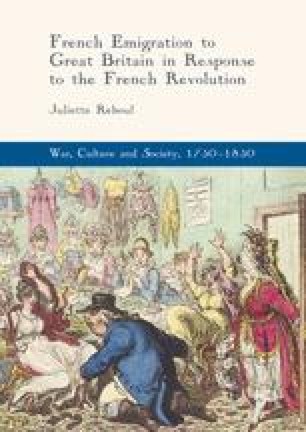 Discursive Constructions of the Emigrant Figure in Loyalist Britain

This chapter discusses the construction and identification of the French emigrant persona in British public and private discourse. In Loyalist Britain, the legislative, administrative and social control of aliens engendered a climate of suspicion in which foreigners were likened, by default, to political enemies and religious dissenters. In this ideology, the accepted figure of the refugee-emigrant was used as a rhetorical prop to demonstrate the munificence and superiority of British constitutionalism and Anglicanism. This argument utilizes State legislation, newspaper articles, pamphlets and sermons, satirical imagery and private correspondences.