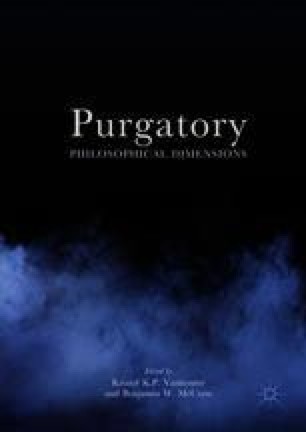 On the Metaphysics of Economics and Purgatory

This chapter argues that the metaphysics of economic reality offers a suitable foundation for understanding Purgatory. Purgatory, as a place to personally pay off one’s freely incurred debts, is grounded in the same metaphysical framework as economic reality. Two notions figure crucially in this account. The quality space permeates all of reality and its two extremities are eternal bliss or eternal suffering, i.e. Heaven and Hell. Fitness peaks are action possibilities that transfactually cause a person to reach a position in that quality space that is relatively higher than other nearby action possibilities. They are dynamic, i.e. they can grow or shrink through time or because of our actions. A person is always either more disposed towards the one ultimate fitness peak called Heaven, or more disposed away from it. This results largely from the decisions and habits of a lifetime, even though the last moments before death remain crucial. For those tending more towards Heaven than away from it, but lacking a perfect directedness towards it, their death leaves them at a metaphysical distance from Heaven. This distance is the accumulated debt relative to the fitness peak Heaven. Purgatory is the bridging of that distance, while lacking the abundant powers and resources of creation that can be used to reach that fitness peak. Since the period for making decisions is over, one can only passively undergo this process of purification, at the rate at which one was disposed towards Heaven at the moment of one’s death.