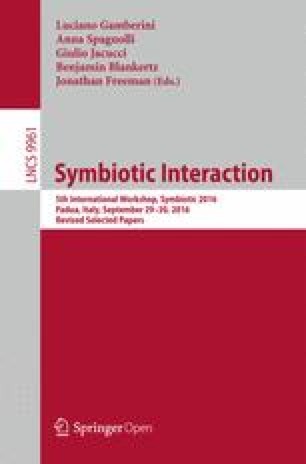 The core characteristics of tactile stimuli, i.e., recognition reliability and tolerance to ambient interference, make them an ideal candidate to be integrated into a symbiotic system. The selection of the appropriate stimulation is indeed important in order not to hinder the interaction from the user’s perspective. Here we present the process of selecting the most adequate tactile stimulation delivered by a tactile vest while users were engaged in an absorbing activity, namely playing a video-game. A total of 20 participants (mean age 24.78; SD = 1.57) were involved. Among the eight tactile stimuli selected, we found that the most frequently chosen stimulus was the one stimulating the back of the participant from the upper to the lower area.

Tactile interfaces take advantage of the sense of touch, particularly stimulating mechanoreceptors in the skin, to deliver feedbacks to the user [1, 2]. Tactile displays have proved to be an effective and powerful means for communicating information to users, even when they are already engaged in another activity (e.g., working) users can reliably comprehend messages enclosed in the tactile mode [3, 4]. Given the size of the actuators, tactile displays are usually implemented as wearable computers [5], i.e., fully functional and self-contained electronic devices to be worn and allowing the user to have constant access to information [6]. As already noted by [6], wearable computers are an ideal component of symbiotic systems (i.e., systems that record and interpret a user’s cognitive and affective states and respond accordingly), given their ubiquitous and portable nature.

The integration of tactile displays in symbiotic systems could enhance the interaction between the user and the system. Differently from visual or acoustic feedback, tactile stimulations are reliable, because they are tolerant to ambient interference [7]. Furthermore, tactile stimuli require less attentional resources to be processed and lead to natural and fast responses [7, 8]. In sum, a symbiotic system including tactile stimulations could deliver subtle and unobtrusive feedbacks to the user, thus allowing him/her to keep the interaction focus on the environment [2]. Nevertheless, a proper selection of the tactile stimuli is needed, since the delivery of annoying stimulation could instead disturb and distract the user.

The experiment presented here aimed at identifying the most suitable tactile stimuli delivered through a tactile vest while the user was engaged in an involving activity, namely playing a video-game. In addition, we tested if the preferences emerged were consistent during the entire experimental session. The method employed was devised and comprised both objective data from users’ interaction and subjective data from interviews.

The tactile vest was designed to produce vibrotactile sensations resembling the touch patterns made by kinesiologist-neurophysiologists to activate or calm down a person [9]. The vest is composed of two layers: the inner layer holds 44 actuators and the outer layer keeps the actuators tight to the wearer’s skin [9]. All actuators are attached through moveable Velcro patches to adjust their position according to different body sizes (Fig. 1). The vest is connected over Bluetooth with an Android tablet (Nvidia Shield Tablet K1) and a dedicated application was developed to activate the tactile stimuli.
We selected eight of the patterns that prior results [9] had shown either activated or calmed vest wearers. The stimuli were designed with overlapping transitions to create a smooth flowing sensation [9]. Details for each stimulus can be found in Table 1.
Table 1.

The user was first debriefed on the overall procedure and the goals of the activity. Then s/he signed an informed consent form. The participant wore the tactile vest, sat at the desk and then the training phase started. The experimenter activated all the different tactile stimuli while the user started to play the video game using a desktop PC (\( 21^{\prime \prime } \) monitor) and the computer mouse, in order to make him/her familiar with the task, for an approximate duration of 4 min. After that, the actual experimental session started and lasted about 8 min. During the experimental trail the user was asked to play a popular video-game called Puzzle-Bubble1 and to activate the tactile stimuli s/he preferred at his/her will by tapping on the tablet paired with the tactile vest. After the experimental session ended, participants answered a brief interview.

A total of 20 people volunteered for the study, 6 of them were male. The mean age of the sample was 24.78 years old (SD = 1.57). Participants were recruited by word of mouth and only one of them had never played Puzzle Bubble before. None of them reported to be a regular video-game player. Participants received no compensation for taking part in the study.

Users’ preferences for the different tactile stimuli can be divided in three temporal intervals, each lasting about 4 min. The first interval corresponded with the training phase; the second interval corresponded to the first half of the experimental session and the third one coincided with the second half of the experimental trail. The data logged during the training were excluded from the analysis. For the first and second temporal intervals of the experimental session, we computed the percentage of times each tactile stimulus was chosen and then compared it against the expected frequency if users chose that stimulus randomly, i.e., 12.5%, through a one-sample t-test.

The values of the one sample t-test, average selection rate and standard deviations for each of the stimuli participants are reported. *p < .05

The experiment presented here aimed at identifying vibrational stimuli that could be integrated into a symbiotic system. By asking participants to freely choose the stimulation they preferred, we found that the stimulus users favored was characterized by a vibrational pattern activated from the upper toward the lower area of the back. Interestingly, the vibration of the same set of actuators, yet activated in the reverse order, which characterized Stimulus #1, was the least chosen stimulus. This finding suggests that besides the basic parameters characterizing a tactile stimulus, i.e., the intensity, the rhythm and the area on the body on which the tactile stimuli are applied [4], developers should also take into account the feeling that a given stimulation produces on the user. As emerged from the interviews, participants’ choices were mainly motivated by the pleasantness of the stimuli.

In addition, we found that participants’ preferences were overall stable throughout the entire experimental session, suggesting that when a tactile stimulation is perceived as (un)pleasant the feeling persists over time.