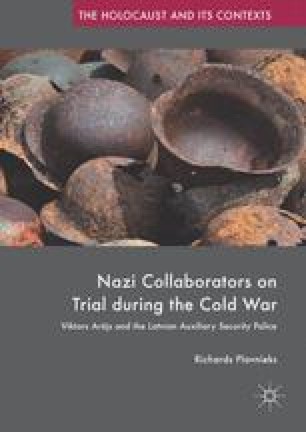 The Union of Soviet Socialist Republics: Justice Behind Propaganda

This chapter is the first of four case studies into the post-war judicial ramifications of the Arajs Kommando’s crimes. A great volume of reliable data was accumulated by the investigations, conducted by the Soviets between 1944 and 1967, of some 356 captured men of the Kommando. However, in public, a related but partly falsified official history was substituted and periodically adjusted by the Communist Party for purposes of political utility according to the times, alternately minimizing or amplifying Latvian collaboration in the interest of domestic cohesion or anti-Western agitprop. Thus, paradoxically, while responsible for investigating and punishing the greatest number of Arajs Kommando perpetrators, the USSR also did the most to distort the historical truth of the Holocaust in Latvia.

Kommando Soviet Justice Latvian Soviet Socialist Republic Nazi Crimes Soviet Investigators
These keywords were added by machine and not by the authors. This process is experimental and the keywords may be updated as the learning algorithm improves.
This is a preview of subscription content, log in to check access.