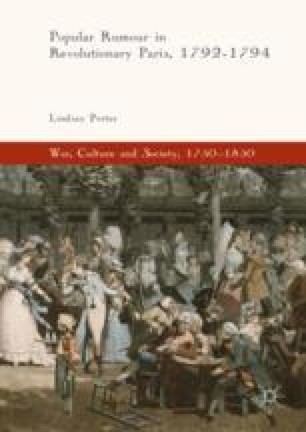 “Rumour, Reputation and Identity”, argues that personal reputation becomes both increasingly politicised as well as ever more vulnerable to unsubstantiated rumour. The conventionnels’ belief in personal and political virtue had its counterpart among the menu peuple, with judgements about personal integrity increasingly synonymous with patriotic authenticity and vice versa. Personal insults, if damaging enough to one’s reputation, had always been a matter for the police; in year II they were increasingly categorised as “calumny”—a serious crime. How individuals were viewed by their peers, and whether they enjoyed the good opinion of the community at large, became defined by notions of patriotism, until ultimately, individual personality became a measure of Republican commitment.