Phenomenology and the Primacy of the Political 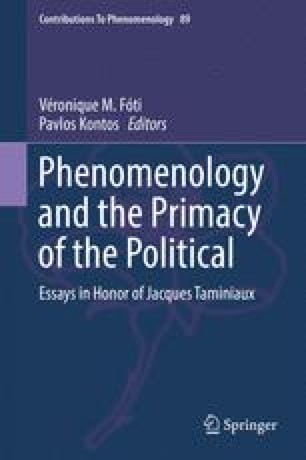 “We will talk about speculation and judgment.” These are the words uttered in my mind’s ear with the sonorous whisper of his French-Belgian accent that came to mind when I thought of writing something in honor of Professor Jacques Taminiaux. It was common for him to begin class with such an introduction coupled with the forewarning that our discussion must inevitably be “provisional.” Mining the history of philosophy requires of our attempt a willingness to continually ask the questions that preceded the questions that preceded the questions. It may well be that the history of philosophy is, as Whitehead averred, a footnote to Plato, but as Taminiaux knew well, Plato’s philosophizing was always “in the shadow of the work of art.” Indeed, it was Taminiaux’s approach to philosophizing that inspired my attempt—humble and provisional to be sure—to explore the roots of the concept of genius as it emerged in Immanuel Kant’s thought.

Aesthetic Experience Aesthetic Judgment Campus Community Reflective Judgment True World
These keywords were added by machine and not by the authors. This process is experimental and the keywords may be updated as the learning algorithm improves.
This is a preview of subscription content, log in to check access.