Mechanics for Materials and Technologies 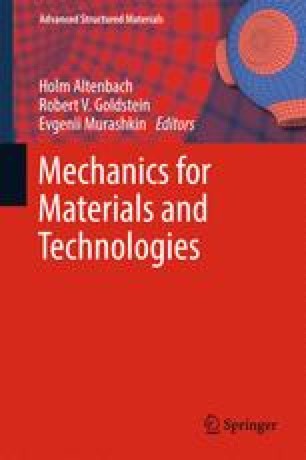 Mechanics for Materials and Technologies pp 417-431 | Cite as

The Dynamics of an Accreting Vibrating Rod

A linear model of longitudinal vibration is formulated for a viscoelastic rod subjected to external harmonic excitation within the framework of the classical theory of vibrating rods. It is assumed that the rod has a time-dependent variable length and cross-section. A mixed problem of dynamics is formulated, which contains non-conventional fixed-free boundary conditions with the coordinate on the right-hand side of the rod being dependent on time. A special transformation of variables eliminates the dependence of the right-hand side coordinate of the boundary conditions on time. The transformation substantially simplifies the boundary conditions, converting them to the classical fixed-free boundary conditions. The simplification of the boundary conditions is, in turn, exacerbated by the equation of rod motion because it becomes a linear partial differential equation with variable coefficients containing some additional terms. The proposed solution of this equation is built in terms of a trigonometric series with time-dependent coefficients, where the spatial components satisfy the boundary conditions. In this case the original partial differential equation is converted into an infinite system of coupled ordinary differential equations with corresponding initial conditions. Truncation of the system produces an initial problem which is solved numerically. The corresponding truncated trigonometric series rapidly converges to the solution. The solutions are built for different combinations of the parameters of the varying rod. It is shown that for lightly damped rods, the amplitudes of different modes are mainly defined by free solutions of the initial problem. The notion of generated equations of the system is introduced. Free solutions can be obtained from the generating equations of the coupled system of ordinary differential equations. Moreover, exact solutions of the generating equations are built in terms of the elementary Kummer and confluent Heun functions. These exact solutions give one proper insight into the dynamic processes governing vibrations of the varying lightly damped rods. In the case of heavily damped coefficients, free vibration of the rod is rapidly suppressed and the amplitude behaviour of the modes on a finite time interval is defined by the excitation force. For example, in the case of a linearly growing rod of constant volume, the amplitude of the equivalent excitation force also grows proportionally to time. Owing to this effect, the amplitudes of the particular modes, in turn, are linearly increased with time.