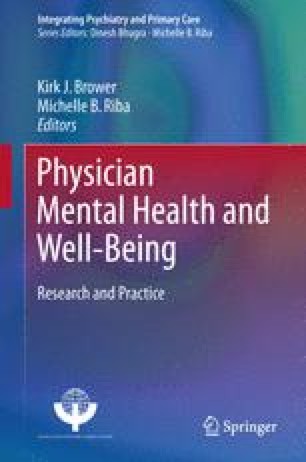 Organization-Level Interventions to Promote Physician Health and Well-Being: From Taking Care of Physicians to Giving Care to Patients

Physician burnout is not simply a problem of problematic physicians. It is a worldwide, workplace-related phenomenon, shaped by systemic and individual factors. To address modifiable risk factors and promote physician engagement, satisfaction, and well-being, both individual and organizational interventions are needed. Enhancing individual resiliency is necessary but not sufficient, and it can inadvertently shift sole responsibility onto physicians. Conversely, when organizations visibly acknowledge and address workplace factors, they legitimize the burden on physicians and share responsibility for mitigating those factors. Organizational interventions target six major work-related factors: (1) work overload relative to the time available, (2) insufficient autonomy with loss of both discretionary time and input into decisions affecting patient care, (3) a non-supportive interpersonal work environment, (4) incentives tied to productivity, based on increased fiscal and performance monitoring, with diminishing respect and appreciation, (5) perceived organizational injustice, and (6) misaligned values between physicians and their organizations. Organizational culture and individual physicians differ across healthcare systems and clinical units. Thus, while burnout is global, interventions are local. Participatory organizational interventions are effective and address local conditions. They are designed, customized, and implemented by physicians based on the work factors they identify as being most important to the functioning of their clinical units and well-being. Leaders have good reason to support organizational interventions, because engaged and healthy physicians will support their triple aim of improving the healthcare of populations, enhancing their patients’ experience of care, and reducing costs. The fourth aim of improving the experience of providing care calls upon organizations to embrace physician health and well-being as a core value and goal.

To Drs. Jack Billi, Jane Lemaire, Mark Linzer, and Vita McCabe as well as Claire Weiner for their helpful comments and reviews of this chapter.

Burnout, job satisfaction/dissatisfaction, engagement, and well-being are overlapping and correlated constructs. They differ in terms of positive (engagement, well-being) or negative (burnout, dissatisfaction) emphasis and measurement. When considering studies of burnout and related constructs, readers are encouraged to consider the study population (all physicians vs. specialty and subspecialty physicians, stage of career from training to pre-retirement, hospital vs. ambulatory care practice, academic vs. community and urban vs. rural settings, and country of origin); study methods (sampling, response rates, longitudinal vs. cross-sectional design, measurement tools, and multivariate analyses); and the dates of data collection because of cohort and environmental effects (Shanafelt et al. 2015a).

Burnout. The most dominant definition of burnout derives from the work of Maslach and colleagues (2001) who described it as a stress-induced, work-related syndrome characterized by (1) emotional exhaustion; (2) a negative reaction to the job, including cynicism and detachment from patients (called depersonalization); and (3) a decreased sense of personal accomplishment and feeling ineffective at doing what used to be meaningful work. Burnout is most commonly measured with the 22-item Maslach Burnout Inventory, a copyrighted instrument, although shortened versions and other instruments are also used. Some research has emphasized the greater importance of emotion exhaustion and cynicism than personal accomplishment. Many physicians are able to maintain their sense of efficacy under stressful work conditions.

Engagement. Physician engagement has been viewed on the same continuum as—and opposite of—burnout (Maslach et al. 2001). When 1666 US physicians were asked on a scale of 1–10 how important feeling engaged was to their job satisfaction, the average score was 8.0 indicating a high degree of importance (Stark 2014). As measured by the Utrecht Work Engagement Scale, it has three factors: vigor (feeling strong, energized, and motivated at work), dedication (feeling enthusiastic about, inspired by, and proud of work), and absorption (feeling happy when immersed and engrossed in work).

Satisfaction/Dissatisfaction. Multiple studies have shown that physician satisfaction is negatively correlated with burnout (Amoafo et al. 2015; Keeton et al. 2007; Williams et al. 2007; Arora et al. 2014). In the USA dissatisfaction has been increasing since the 1980s, initially associated with the spread of managed care and increasing malpractice insurance rates and claims. Direct questions about satisfaction may focus on one’s current job, chosen specialty, or a career in medicine; income and benefits; personal time (satisfaction with work-home balance); enough time to see patients; and relationships with other physicians, staff, and patients (Shanafelt et al. 2015a; Friedberg et al. 2013). Indirect questions about career satisfaction may inquire about one’s likelihood of recommending the profession to others, leaving one’s current job, retiring altogether, or switching to another career or specialty within a certain period (ranging from 1 to 5 years). Objective indicators of satisfaction have included the number of applicants to medical schools over time, strikes by unionized physicians such as in the UK, and rates of physician turnover.

Well-Being. Wellness, well-being, and health are related constructs. Health was defined in 1948 by the World Health Organization (WHO) as “a state of complete physical, mental and social well-being and not merely the absence of disease or infirmity” (WHO 1948). Mental health is described as “… a state of well-being in which the individual realizes his or her own abilities, can cope with the normal stresses of life, can work productively and fruitfully, and is able to make a contribution to his or her community… In this positive sense mental health is the foundation for well-being and effective functioning for an individual and for a community” (World Health Organization 2004). Well-being is described as a state of positive mental health to emphasize that it is not simply the absence of disease. Well-being is measured by physicians’ overall evaluations of their lives (job and life satisfaction) and job-related emotional experiences (higher positive and lower negative affects). Well-being is also associated with better quality of patient care (Scheepers et al. 2015).

Joy in Practice and Happiness. This newer and evolving concept encompasses physician well-being, career satisfaction, and work engagement but further attempts to capture the essence and meaning of the physician’s professional calling and the medical encounter itself, which is to cultivate a healing relationship with patients that facilitates provision of high-quality care (Sinsky et al. 2013). Any obstacles to doing so will contribute to burnout, disengagement, and dissatisfaction. Happiness may be linked to joy through its emphasis on career purpose and personal accomplishment (Eckleberry-Hunt et al. 2016).