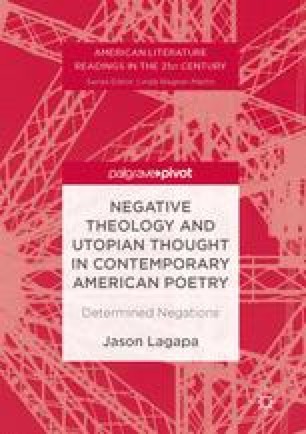 Our Message Was Electric: Susan Howe and the Resuscitation of Failed Utopian Projects

This chapter reveals the utopian impulse and rhetoric of negation that underpin Susan Howe’s investigation of the historical past. Two of Howe’s works, Souls of the Labadie Tract and The Midnight, address the consequences of failed utopian social ideals. Central to each book is a visionary figure: Jean de Labadie is a seventeenth-century pastor whose religious beliefs inspire a utopian sect in Maryland in Souls of the Labadie Tract, and landscape designer, Frederick Law Olmsted envisions an ideal municipal park in Buffalo, New York, in The Midnight. Lagapa argues that, despite the collapse of these men’s plans, a utopian dynamic might be resuscitated from their failed projects, particularly if Howe’s poems are read properly—as a negative image of the promise of utopia.

Cite this chapter as:
Lagapa J. (2017) Our Message Was Electric: Susan Howe and the Resuscitation of Failed Utopian Projects. In: Negative Theology and Utopian Thought in Contemporary American Poetry. American Literature Readings in the 21st Century. Palgrave Macmillan, Cham. https://doi.org/10.1007/978-3-319-55284-2_2