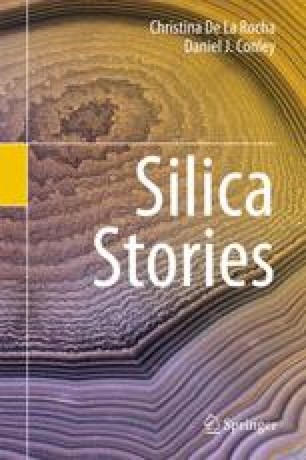 For as long as it has had both water and rock, the Earth has had a silica cycle. This cycle begins with the creation of the silicate rock of new mountains, mountain belts, and ocean floor. Weathering wears these materials down, transferring their silica slowly to the sea. Thanks to plate tectonics, solid silica that ends up at the bottom of the ocean returns to the interior of the Earth to replenish the reservoir of material from which new silicate rock is made. These days, along the way from rock to sea to deep sea sediment, silica cycles through the fields and forests, diatom blooms, and glass sponges of the biosphere. But these enormous diversions are a new thing. For most of Earth history, there was no such thing as silica biomineralization and there were no biological loops in the silica cycle. Thus the silica cycle that we have today, the one that we tend to think of as normal, default, and everlasting, has not just features but major features it did not possess for the majority of its existence. On the other hand, that shouldn’t surprise us. That’s what happens with systems that progressively evolve.

Oceanic Crust Silicate Mineral Silicate Rock Ocean Floor Biogenic Silica
These keywords were added by machine and not by the authors. This process is experimental and the keywords may be updated as the learning algorithm improves.
This is a preview of subscription content, log in to check access.