Economics as a Moral Science 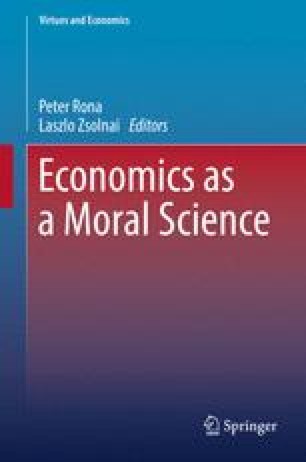 Understanding Financial Crises: The Contribution of the Philosophy of Money

The paper underlines that the origin of money lies more in the religious and legal sphere than in the economic realm. Money was used in the exchange between men and goods and in order to compensate for manslaughter, rather than for facilitating the satisfaction of material needs. ‘Vergelding’, the conversion of guilt into debt was a means to prevent revenge and violence. But soon unease cropped up: the possibility to express everything that is valuable in monetary terms was felt as a form of violence against the soul of men and things.

Aristotle has tried to fit money in a teleological view of the world, but he was faced with the ambivalence of money. Money was deemed to be good as a unit for calculation and as a means of exchange, but it was distrusted as a value reserve. However, it is impossible to separate the three functions of money, as many utopian reformers of the monetary order have tried. The paper emphasizes that nowadays we experience the violent potential of money in the coercion to pay back our debts. Debts have to be repaid, otherwise the debtor will be destroyed as an autonomous subject. The conflict between various categories of debtors and creditors is the most prominent form of “class struggle” we face in our society. It is also a clash between various conceptions of distributive justice.