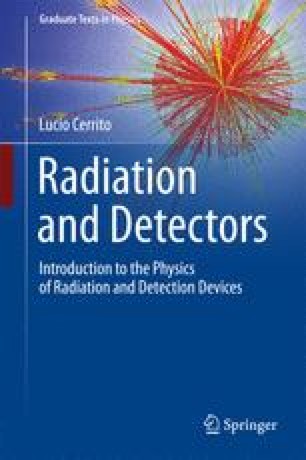 The detection of particles is possible through their energy loss in the material of the detector. In other words, in order to be detected a particle must interact with the material of the detector, and in doing so it must transfer energy in some form that can be recognised. The content of this chapter focuses on the energy loss of an heavy charged particle through scattering by atomic electrons, and the consequent ionisation of the medium. The same mechanism underpins the principles of the detectors described in Chaps.  7– 9.

Energy Loss Heavy Particle Bragg Peak Incident Particle Atomic Electron
These keywords were added by machine and not by the authors. This process is experimental and the keywords may be updated as the learning algorithm improves.
This is a preview of subscription content, log in to check access.

Bragg curve Distribution of differential energy loss as a function of the penetration depth, in the ionisation mechanism by heavy charged particles

Bragg peak Peak appearing towards the end of the curve of differential energy deposition versus penetration depth, in the ionisation mechanism by heavy charged particles

Energy straggling The spread of energy loss by ionisation away from the mean value, due to the statistical nature of the energy transfer in multiple collisions with target centers

Hadron oncological therapy Use of heavy charged particles, typically protons and ions, in the treatment of tumors by exploiting the localised energy deposition of a Bragg peak at a given depth of tissue

Ionisation interaction The interaction of radiation with the electrons of the absorbing material, leading to the ionisation of some of that material atoms

Minimum ionisation Minimum of the Bethe-Block formula for the rate of energy loss per unit density, corresponding to about 1.5 MeV cm\(^{2}\)/g

Minimum ionising particle Heavy charged particles, such as muons, pions or protons, moving at speeds corresponding to \(\beta \gamma \) between approximately 2 and 100, for which the energy loss by ionisation is around its minimum

Range The penetration depth of a particle through an absorbing material