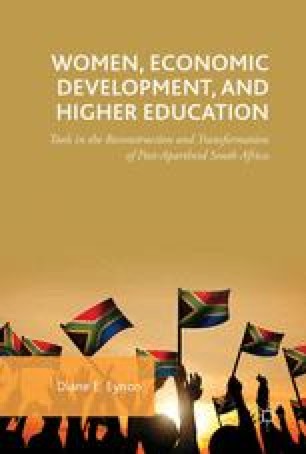 South Africa is a country that has gone through significant changes since 1994. The new government, led by the ANC, set out to transform the country. This chapter looks at the key initiatives that new government undertook to rebuild the country: the writing of a new constitution, the development of macroeconomic growth and development policies, the dismantling and restructuring of the higher education system, and the building of a national framework for gender equality and the empowerment of women.

Helen Suzman was distinctive in many ways—a white Jewish English-speaking woman from a privileged background who served in a male-dominated, Afrikaner-speaking parliament who adamantly and vocally opposed apartheid.

She was first elected to the South African Parliament in 1953 and, by 1960, had become a controversial figure, as she was the only parliamentarian, until 1974, to oppose the National Party’s apartheid policies. And for 6 of the 13 years (1961–1974), she was the only woman in Parliament.

Helen also approached her opposition to apartheid in her own way. In addition to the moral arguments, she argued that South Africa’s economy would suffer under apartheid, as the majority of the country’s people would live in poverty and therefore not be able to contribute to the economy.

Helen not only gave speeches and fought with other members of Parliament against apartheid laws and policies, she actively worked with the poor—often meeting them in her office or in their neighborhoods, listening to their stories, and hearing first-hand of their hardships. As a result of her efforts, the police harassed her, her phone was tapped, and the BBC regularly reported on her work. It was very courageous of her to continue her opposition under such difficult circumstances, yet she persisted and became a beacon of hope to many South Africans and others opposed to apartheid. Helen was known for her fearlessness, energy, sense of humor, and commitment to the principle, “Let right be done.” She also used to quote Theodore Roosevelt: “I did what I could, where I was, with what I had.”

After serving in Parliament for 37 years, Helen left it in 1989, the year President F.W. de Klerk lifted the ban on liberation movements and released political prisoners, including Nelson Mandela, whom Helen visited several times during his imprisonment. She was present at the signing of the 1996 constitution and was nominated twice for the Nobel Peace Prize.

On New Year’s Day, 2009, Helen Suzman died at the age of 91. Her legacy will be what Nelson Mandela called her “magnificent battle against apartheid.”

In the 1950s, Winnie Madikizela Mandela became involved in the ANC. She met Nelson Mandela in 1957 when he and 155 other people were on trial following the civil disobedience campaigns carried out during most of the decade. A year later, Winnie and Nelson were married and settled in Soweto.

Their marriage was interrupted when Nelson was imprisoned for 26 years on Robben Island. Winnie was forced to raise their two daughters alone, and although she had visitation rights, she was prohibited from having any physical contact with Nelson. Winnie was also subject to a series of legal orders and banned under the Suppression of Communism Act, restricting her to a township in Soweto.

That forced her underground, where she continued to attend meetings and circulate antiapartheid materials. It was during this period that Winnie sent her daughters to Swaziland to protect them from harassment and so they could continue their education. In 1970, Winnie was placed under house arrest, but she continued to violate the order resulting in numerous charges and additional arrests.

In 1976, Winnie established the Black Women’s Federation and the Black Parent Association. Those organizations became part of the Black Consciousness Movement, which rejected “white” values. It was for her involvement in those organizations and other antiapartheid activities that she was once again detained and later put under house arrest

Winnie returned home in 1986 and found herself surrounded in controversy. She publicly endorsed the use of the “necklace” method (placing a tire around the neck of a person, dousing it with gasoline, and setting it on fire) of killing dissidents and alleged police informants. She also was criticized for the behavior and acts of a group of young men who acted as her bodyguards.

In 1990, Nelson Mandela was released from prison with Winnie at his side. The following year, she was elected to the ANC’s National Executive Committee but was also charged with the kidnapping and murder of a 14-year-old boy, Stompie Seipei, whom she believed was a police informant. She was found guilty of kidnapping and sentenced to six years in jail, but on appeal, her sentence was reduced to a fine.

In 1992, Winnie resigned from her ANC positions, including her position in Parliament. She also separated from Nelson, and the two divorced in 1996. When it came to her political involvement, however, she made a comeback and was elected president of the ANC Women’s League in 1993. After the 1994 elections, Winnie was appointed Deputy Minister of Arts, Culture and Science and Technology. But after she was accused of financial mismanagement, Nelson dismissed her in 1995.

Winnie was charged with fraud and theft from the funeral accounts of loan applicants in 2001 and sentenced to five years in prison. But, in 2004, an appeals court judge overturned the conviction for theft while upholding the fraud charges, resulting in a three- and- a- half- year suspended sentence. She resigned as president of the ANC Women’s League in 2003.