Questions on the Soul by John Buridan and Others 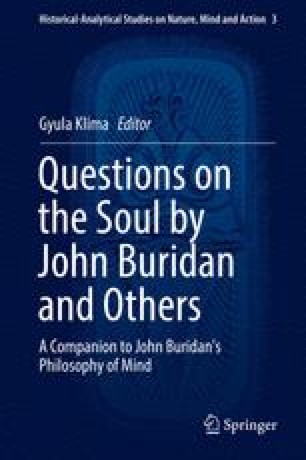 Was Buridan a ‘Psychologist’ in His Logic?

Ashworth’s chapter deals with the issue of how objective, linguistic meaning can arise from our subjective, individual mental representations, considering the plausibly emerging charge that Buridan’s account of the relationship between language and thought, taking linguistic signs to be subordinated to individual mental acts of individual human minds, makes his conception of logic susceptible to Frege’s famous arguments against “psychologism” in logic. The chapter argues that Buridan’s focus in his logic was on epistemology rather than psychology. Invoking the idea of a natural similarity among our individual mental representations, and thus the idea of a mental language as the common, natural representational system of all human thought, Buridan is able to avoid Frege’s criticisms. Nevertheless, he does seem to have been an adherent of what Susan Haack has called “weak psychologism”: Buridan did not think that logic involves only a description of how we do think, but that it prescribes how we should think.