Transnational Histories of the 'Royal Nation' 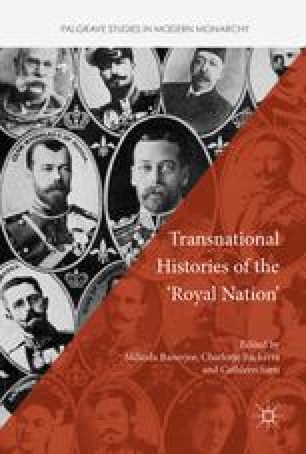 Transnational Histories of the 'Royal Nation' pp 21-43 | Cite as

This chapter argues that monarchy—as conceptual abstraction, ‘the rule of one’—has provided to many modern political actors a way of imagining the nation as possessed of a unitary centre of identity and sovereignty, with the monarch as the conceptual—and not just, or even necessarily, the practical/political—apex. The royal nation has thus been a fundamentally important, though scarcely theorized upon, phenomenon in global history and the history of political thought. To build the argument, the chapter draws upon debates in global intellectual history and monarchy studies, as well as upon primary sources from late nineteenth- and early twentieth-century Britain, Canada, India, Italy, and Japan. By analysing mobilities of political actors, ideas of rulership, and theologies, it shows how monarchy was often constructed—in transcontinentally entangled ways—as a privileged route to forming a modern nation. The royal nation became a debating centre for varied conceptions of power, including anti-colonial ones, leaving important legacies which often survive the absence or demise of formal kingships. The chapter suggests that this conceptual dependence of many nationalisms on ideas of monarchy needs to be deconstructed today, if we are to critique the association of nationalisms with varied notions of exclusivist sovereignty, hierarchy, and ethnic/sectarian dominance.

Prime Minister National Unity Intellectual History State Sovereignty National Discourse
These keywords were added by machine and not by the authors. This process is experimental and the keywords may be updated as the learning algorithm improves.
This is a preview of subscription content, log in to check access.