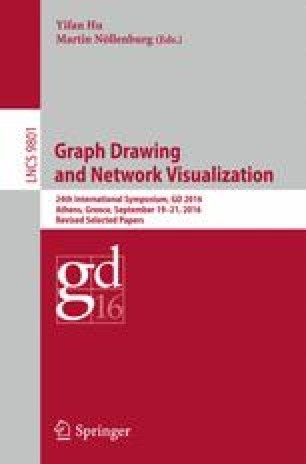 Visibility Representations of Boxes in 2.5 Dimensions

We initiate the study of 2.5D box visibility representations (2.5D-BR) where vertices are mapped to 3D boxes having the bottom face in the plane \(z=0\) and edges are unobstructed lines of sight parallel to the x- or y-axis. We prove that: (i) Every complete bipartite graph admits a 2.5D-BR; (ii) The complete graph \(K_n\) admits a 2.5D-BR if and only if \(n \leqslant 19\); (iii) Every graph with pathwidth at most 7 admits a 2.5D-BR, which can be computed in linear time. We then turn our attention to 2.5D grid box representations (2.5D-GBR) which are 2.5D-BRs such that the bottom face of every box is a unit square at integer coordinates. We show that an n-vertex graph that admits a 2.5D-GBR has at most \(4n - 6 \sqrt{n}\) edges and this bound is tight. Finally, we prove that deciding whether a given graph G admits a 2.5D-GBR with a given footprint is NP-complete. The footprint of a 2.5D-BR \(\varGamma \) is the set of bottom faces of the boxes in \(\varGamma \).

Visibility Representation Complete Graph Geometric Object Hamiltonian Path Complete Bipartite Graph
These keywords were added by machine and not by the authors. This process is experimental and the keywords may be updated as the learning algorithm improves.

Research started at the 2016 Bertinoro workshop on Graph Drawing. Research supported in part by NSERC, and by MIUR project AMANDA prot. 2012C4E3KT_001.

A bar visibility representation (BVR) maps the vertices to horizontal segments, called bars, while visibilities are vertical segments. BVRs were introduced in the 80 s as a modeling tool for VLSI problems [16, 27, 28, 34, 35, 36]. The graphs that admit a BVR are planar and they have been characterized under various models [16, 28, 34, 36].

Extensions and generalizations of BVRs have been proposed in order to enlarge the family of representable graphs. In a rectangle visibility representation (RVR) the vertices are axis-aligned rectangles, while visibilities are both horizontal or vertical segments [4, 5, 10, 12, 13, 23, 29, 31]. RVRs can exist only for graphs with thickness at most two and with at most \(6n-20\) edges [23]. Recognizing these graphs is NP-hard in general [29] and can be done in polynomial time in some restricted cases [4, 31]. Generalizations of RVRs where orthogonal shapes other than rectangles are used to represent the vertices have been recently proposed [15, 26]. Another generalization of BVRs are bar k-visibility representations (k-BVRs), where each visibility segment can “see” through at most k bars. Dean et al. [11] proved that the graphs admitting a 1-BVR have at most \(6n-20\) edges. Felsner and Massow [20] showed that there exist graphs with a 1-BVR whose thickness is three. The relationship between 1-BVRs and 1-planar graphs has also been investigated [1, 7, 17, 32].

RVRs are extended to 3D space by Z-parallel Visibility Representations (ZPR), where vertices are axis-aligned rectangles belonging to planes parallel to the xy-plane, while visibilities are parallel to the z-axis. Bose et al. [6] proved that \(K_{22}\) admits a ZPR, while \(K_{56}\) does not. Štola [30] subsequently reduced the upper bound on the size of the largest representable complete graph by showing that \(K_{51}\) does not admits a ZPR. Fekete et al. [18] showed that \(K_7\) is the largest complete graph that admits a ZPR if unit squares are used to represent the vertices. A different extension of RVRs to 3D space are the box visibility representations (BR) where vertices are 3D boxes, while visibilities are parallel to the x-, y- and z- axis. This model was studied by Fekete and Meijer [19] who proved that \(K_{56}\) admits a BR, while \(K_{184}\) does not.

In this paper we introduce 2.5D box visibility representations (2.5D-BR) where vertices are 3D boxes whose bottom faces lie in the plane \(z=0\) and visibilities are parallel to the x- and y-axis. Like the other 3D models that use the third dimension, 2.5D-BRs overcome some limitations of the 2D models. For example, graphs with arbitrary thickness can be realized. In addition 2.5D-BRs seem to be simpler than other 3D models from a visual complexity point of view and have the advantage that they can be physically realized, for example by 3D printers or by using physical boxes. Furthermore, this type of representation can be used to model visibility between buildings of a urban area [9]. The main results of this paper are as follows.

For reasons of space, some proofs and details are omitted and can be found in [3].

A box is a six-sided polyhedron of non-zero volume with axis-aligned sides in a 3D Cartesian coordinate system. In a 2.5D box representation (2.5D-BR) the vertices are mapped to boxes that lie in the non-negative half space \(z \geqslant 0\) and include one face in the plane \(z=0\), while each edge is mapped to a visibility (i.e. a segment whose endpoints lie in faces of distinct boxes and whose interior does not intersect any box) parallel to the x- or to the y-axis. We remark that visibilities between non-adjacent objects may exist, i.e., we adopt the so called weak visibility model (in the strong visibility model each visibility between two geometric objects corresponds to an edge of the graph). The weak model seems to be the most effective when representing non-planar graphs and it has been adopted in several works (see e.g. [4, 7, 17]). As in many papers on visibility representations [19, 24, 31, 33, 36], we assume the \(\epsilon \) -visibility model, where each segment representing an edge is the axis of a positive-volume cylinder that intersects no box except at its ends; this implies that an intersection point between a visibility and a box belongs to the interior of a box face. In what follows, when this leads to no confusion, we shall use the term edge to indicate both an edge and the corresponding visibility, and the term vertex for both a vertex and the corresponding geometric object.

In this section we consider 2.5D-BRs of complete graphs and complete bipartite graphs.

The following lemma is similar to the Erdős–Szekeres lemma and can be proved in a similar manner [18]. A sequence of distinct integers is unimaximal if no element of the sequence is smaller than both its predecessor and successor.

In a 2.5D-BR of a complete graph no line parallel to the x-axis or to the y-axis can stab five boxes whose heights, in the order in which the boxes are stabbed, form a unimaximal sequence.

In a 2.5D-BR of a complete graph no line parallel to the x-axis or to the y-axis can stab more than 10 boxes.

A complete graph admits a 2.5D-BR only if it has at most 19 vertices.

We conclude this section by exhibiting a 2.5D-BR of \(K_{19}\), illustrated in Fig. 2. To prove the correctness of the drawing the idea is to partition the vertex set of \(K_{19}\) into five subsets (shown in Fig. 2) and prove that all boxes in a given set see all other boxes. The following theorem holds.

4 2.5D Box Representations of Graphs with Pathwidth at Most 7

A graph G with pathwidth p is a subgraph of a graph that can be constructed as follows. Start with the complete graph \(K_{p+1}\) and classify all its vertices as active. At each step, a vertex is deactivated and a new active vertex is introduced and joined to all the remaining active vertices. The order in which vertices are introduced is given by a normalized path decomposition, which can be computed in linear time for a fixed p [22].

Every n-vertex graph with pathwidth at most 7 admits a 2.5D-BR, which can be computed in O(n) time.

We describe an algorithm to compute a 2.5D-BR of a graph G with pathwidth 7. The algorithm is based on the use of eight groups of rectangles, a subset of which will form the footprint of the 2.5D-BR of G. For graphs with pathwidth \(p < 7\), the same algorithm can be applied by considering only \(p+1\) groups, arbitrarily chosen.

We now prove that \(\varLambda _i\) satisfies invariant I1 by showing that the addition of \(v_i\) does not destroy any existing visibility and that \(\varLambda _i(v_i)\) sees all the other active vertices inside the appropriate regions. We have different cases depending on the group h of \(v_i\).

The above construction can be done in O(n) time. Since the normalized path decomposition can be computed in O(n) time, the time complexity follows.   \(\square \)

Next we give a tight bound on the edge density of graphs admitting a 2.5D-GBR. The proof is based on the fact that a set of aligned (unit square) boxes induces an outerplanar graph. A square grid of boxes gives the bound.

Deciding whether a given graph G admits a 2.5D-GBR with a given footprint is NP-complete, even if G is a path.

We now describe a reduction from the HPCG problem. Let \(G_H\) be an instance of the HPCG problem, i.e. a cubic graph, with \(n_H\) vertices and \(m_H\) edges. We compute an orthogonal grid drawing \(\varGamma _H\) of \(G_H\) such that every edge has exactly one bend and no two vertices share the same x- or y-coordinate. Such a drawing always exists and can be computed in polynomial time with the algorithm by Bruckdorfer et al. [8]. We now use \(\varGamma _H\) as a trace to construct an instance \(\langle G, F \rangle \) of the 2.5GBR-WGF problem, where G is a path and F a footprint, i.e., a set of squares. G is a path with \(4n_H+m_H\) vertices and therefore F will contain \(4n_H+m_H\) squares. The footprint F is constructed as follows. \(\varGamma _H\) is scaled up by a factor of four. In this way, every two vertices/bends are separated by at least four grid units. Each vertex v of \(\varGamma _H\) is replaced by a set S(v) of four unit squares. In particular if vertex v has coordinates (4x, 4y) in \(\varGamma _H\), then it is replaced by the following four unit squares: \(S_1(v)\) whose bottom-right corner has coordinates (4x, 4y), \(S_2(v)\) whose bottom-right corner has coordinates \((4x+2,4y)\), \(S_3(v)\) whose bottom-right corner has coordinates \((4x,4y-2)\), and \(S_4(v)\) whose bottom-right corner has coordinates \((4x+2,4y-2)\). We associate with each edge e incident to a vertex v, one of the four squares in S(v). If e enters v from West, North, South, or East, the square associated with e is \(S_1(v)\), \(S_2(v)\), \(S_3(v)\), or \(S_4(v)\), respectively. Let (u, v) be an edge of \(\varGamma _H\) and let \(S_i(u)\) and \(S_j(v)\) (\(1 \leqslant i,j \leqslant 4\)) be the squares associated with (u, v). The bend of \(e=(u,v)\) is replaced by a unit square \(S_{e}\) horizontally/vertically aligned with \(S_i(u)\) and \(S_j(v)\). The set of squares replacing the vertices of \(\varGamma _H\), which will be called vertex squares in the following, together with the set of squares replacing the bends, which will be called edge squares in the following, form the footprint F. Figure 4 shows an orthogonal drawing of a cubic graph and the corresponding footprint F. Observe that the footprint F is such that any two squares are separated by at least one unit and in each row/column there are at most three squares. Let \(F^*\) be a graph with a vertex for each square in F and an edge between two squares if and only if the two squares are horizontally or vertically aligned. It can be proved that \(G_H\) admits a Hamiltonian path if and only if \(F^*\) contains a Hamiltonian path.

There are several possible directions for further study of 2.5D-BRs. Among them: (i) Study the complexity of deciding if a given graph admits a 2.5D-BR. We remark that deciding if a graph admits an RVR is NP-hard. (ii) Investigate other classes of graphs that admit a 2.5D-BR. For example, do 1-planar graphs or partial 5-trees always admit a 2.5D-BR? We remark that there are both 1-planar graphs and partial 5-trees not admitting an RVR. (iii) Study the 2.5D-BRs under the strong visibility model. For example, which bipartite graphs admit a strong 2.5D-BR?