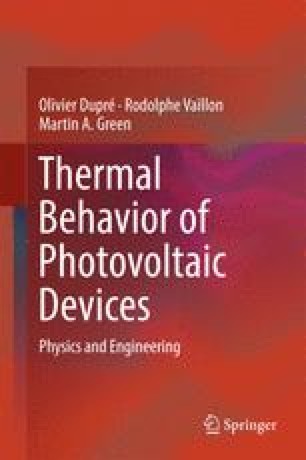 Solar Cell Temperature Coefficient External Quantum Efficiency Maximum Power Point Surface Recombination Velocity
These keywords were added by machine and not by the authors. This process is experimental and the keywords may be updated as the learning algorithm improves.
This is a preview of subscription content, log in to check access.

The analogy illustrated in Fig. 2.21 is inspired by a lecture from Prof. Yablonovitch at the International School of Solid State Physics in 2012. The version presented here is modified to explain better certain physical mechanisms of solar cell operation. In this analogy, a photovoltaic device is compared with a leaky bucket of water. This leaky bucket is connected to a water wheel whose mechanical resistance represents the electrical resistance of the load connected to the solar cell. The power dissipated in the wheel (≡output power) is equal to the product of the water flow, analog of the electrical current, and the pressure head in the bucket which compares to the voltage across the solar cell. Water flows into the bucket by a hose connected to a pump powered by the Sun. The water droplets represent the electrons excited into the conduction band by the incident solar photons. The bucket leaks through its sidewalls to represent the recombination of excited carriers. The more water is in the bucket, the more water leaks from the sides just like recombination rates increase when the cell voltage increases. This analogy illustrates that the amount of water in the bucket (≡cell voltage) depends on the balance between water flowing in by the hose (≡photogeneration) and water flowing out by its sides or through the water wheel (≡recombination and output current). To transfer the maximum power into the wheel, its resistance needs to be adjusted so that it is not too low to maintain some pressure in the bucket but not too high to prevent excessive leaking from the bucket. When the resistance of the waterwheel is negligible—short-circuit configuration—the bucket does not fill and most of the water entering through the shower head exits directly through the waterwheel (J sc  ≈ J photogenerated ). When the outlet to the waterwheel is closed—open-circuit configuration—the bucket fills with water until the flow leaking through the sides equals that entering from the shower head. This explains why the open-circuit voltage indicates the balance between photogeneration and recombination rates.

The following expression is often used for the diode saturation current density of a solar cell (Green 1982):
$$J_{0} = C\,T^{\gamma } \exp \left( { - \frac{{E_{g0} }}{{k\,T_{c} }}} \right).$$
(2.56)
This expression is fundamental as it is a basis for many works dealing with temperature coefficients (Fan 1986; Nell and Barnett 1987; Landis 1994; Yoon and Garboushian 1994; Friedman 1996). The diode saturation current density, J 0 , is a fundamental parameter of solar cells. It corresponds to the diffusion current density of carriers in the reverse diode direction when no voltage is applied, i.e. it is the diffusion current density that balances the drift current density at the p-n junction in equilibrium (Fig. 2.22a). Under an applied forward bias V, the potential at the junction is lowered and the concentration of carriers with enough energy to diffuse across it, is increased by exp(qV/kT c ) (Fig. 2.22b). This explains the form of the ideal diode law (Shockley 1948):
$$J = J_{0} \,\left( {\exp \left( {\frac{q\,V}{{k\,T_{c} }}} \right) - 1} \right).$$
(2.57)
The principle of superposition states that for a linear system, the response to several excitations is equal to the sum of the responses caused by each individual excitation. In the case of a solar cell, the excitations can be caused by light and/or voltage. Assuming linearity (which is usually valid under low injection conditions, i.e. when majority carrier concentrations are much larger that minority carrier concentrations), the principle of superposition states that the current density that can be extracted from a solar cell (J) equals that photogenerated (J ph ) minus that recombined which corresponds to the current density flowing in reverse bias through the diode in the dark:
$$J = J_{ph} - J_{0} \,\left( {\exp \left( {\frac{q\,V}{{k\,T_{c} }}} \right) - 1} \right)$$
(2.58)

This expression illustrates the name commonly given to the parameter J 0 (diode or dark saturation current density). Indeed, in the dark and under a large reverse bias, the current saturate towards the value J 0 . However, the parameter J 0 has a more profound physical signification: it is proportional to the recombination rate in thermal equilibrium (with no applied bias). It is used to describe the strength of the recombination mechanisms independent of the bias condition. Because the value of the bias corresponds to the magnitude of the disequilibrium, the recombination rate can often be written as the product of J 0 and \(\exp \left( {qV/kT_{c} } \right)\). However, the situation can be more complex because different recombination mechanisms have different bias dependences. There is an interesting discussion on the physical meaning of the parameter J 0 and an analysis of different recombination scenarios in Cuevas (2014).

Under a number of assumptions (detailed in Green 1982), J 0 can be derived easily from the carrier transport equations:
$$J_{0} = q\left( {\frac{{D_{e} }}{{L_{e} }}\frac{1}{{N_{A} }}F_{P} + \frac{{D_{h} }}{{L_{h} }}\frac{1}{{N_{D} }}F_{N} } \right)\;n_{i}^{2}$$
(2.59)
F P and FN are factors that account for the finite dimensions of the P and N regions of a pn junction solar cell respectively and are thus function of the surface recombination velocities. D e,h and L e,h are the diffusion coefficients and the diffusion lengths of electrons and holes. N A,D are the doping concentrations of acceptors and donors. n i is the intrinsic carrier concentration which is maybe the most crucial parameter in cell modeling. It corresponds to the concentration of carriers that are thermally excited from the valence band to the conduction band in an intrinsic, i.e. non-doped, material. For a non-degenerate semiconductor, i.e. where the Fermi energy is at least 3kT c away from either band edge, the product of the electron and hole intrinsic concentrations is given by Green (1982):
$$n_{i}^{2} = N_{c} \,N_{v} \,\exp ( - E_{g} /kT_{c} )$$
(2.60)
where N c and N v are the number of effectively available states in the conduction and valence bands.

The thermal energy kT c which causes the random motion of carriers is logically present in the equation of the diffusion coefficient. Also, the mobilities of the carriers are function of temperature. These temperature dependences are function of the doping concentrations because doping impacts the carrier equilibrium concentrations (Klaassen 1992a, b).

Eventually, the dopant concentrations, N A and N D , may depend on temperature in the case of incomplete ionization of the dopants in the range of temperature of interest.

The number of temperature dependent parameters listed above illustrates the complexity of the temperature dependence of the diode saturation current density. In several works (e.g. Nell and Barnett 1987; Friedman 1996), the temperature dependence of \(\frac{{D_{e} }}{{L_{e} }}\frac{1}{{N_{A} }}F_{P}\) in (2.59) is neglected and it is assumed that the temperature dependence of J 0 is driven only by that of n i 2 (neglecting possible temperature dependences of the effective masses). This gives:
$$J_{0} = C\,T_c^{3} \exp \left( { - \frac{{E_{g0} }}{{k\,T_{c} }}} \right)$$
(2.64)
where C is a constant assumed independent of the temperature.
Additional parameters are sometimes used in the diode saturation current density equation (Fan 1986; Yoon and Garboushian 1994). For example, the following equation, initially proposed by Fan, is the basis for several works on temperature coefficients (Fan 1986):
$$J_{0} = C\,T_{c}^{3/a} \exp \left( { - \frac{{E_{g} }}{{b\,k\,T_{c} }}} \right)$$
(2.65)
where C is an empirical parameter related to the cell material and a,b are “empirical parameters depending on the quality of the cell material and junction” (Fan 1986). These parameters are sometimes extracted from fits to experimental data and are not directly correlated to any physical mechanism. However, such analyses can lead to systematic errors in the modeling (Green 2003).
It is noteworthy that the expression of the diode saturation current given by (2.59) corresponds to a scenario where recombinations mainly occur in the quasi-neutral regions, i.e. in the bulk, or at the surfaces. There exist several expressions derived for different limiting scenarios. For example, if the recombinations are mostly happening in the depletion region, the diode saturation current can be written as (Siefer and Bett 2012):
$$J_{02} = \frac{{n_{i} \,W_{d} \,k\,T_{c} \,}}{{2(V_{d} - V)\tau_{n0} }}$$
(2.66)
where W d is the width of the depletion zone, V d is the diffusion voltage and τ n0 is the minimum electron lifetime. This expression shows a different temperature dependence from (2.59). A discussion of different possible scenarios is presented in Sect. 2.3.1.