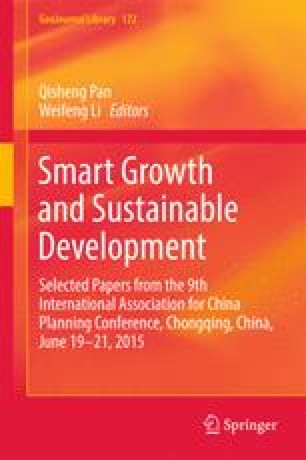 From Polysemous Affect to City Integration: The Definition Thinking and Frontier Method to Radiation Realm of City Rail Transit Station

After gradually planned into city built area, urban rail transit stations have been fusing development with original space, which resulting in a series of new phenomena, problems, and rules need to research deeply and optimizing. As the carrier of event, a precise definition of the radiation realm of transit stations is basic to in-depth knowledge. After the analysis of traditional definition method to radiation realm, academic research sums up the characteristics of “influence” of station to the surrounding city space, which concluded multi-dimensional, multi-level, interactive, timeliness. Based on the platform of Anylogic and ArcGIS, the authors put forward the concept of influenced urban realm around station and finally establish the frontier method of definition after rethinking the rules of definition in integrated thinking, in order to provide a solid foundation to progressive solving the problems in the realm of different levels, and the whole city sustainable development.

Urban rail transit Radiation range of station Influenced urban realm around station Anylogic Arcgis
This is a preview of subscription content, log in to check access.

This research was supported by National Natural Science Foundation of China (Project No. 51478055), Foundation and Frontier Research Project of Chongqing (Grant No. cstc2015jcyjA00047) and Chongqing Graduate Student Research Innovation Project (Project No. CYB14016).