Economic Ideas You Should Forget 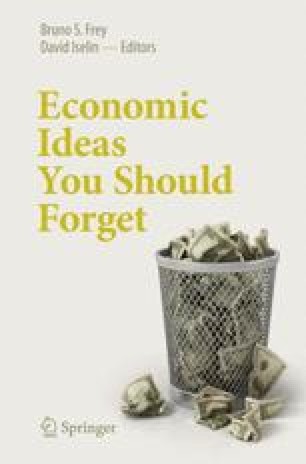 Economic Ideas You Should Forget pp 77-78 | Cite as

The concept of a ‘rational expectation’ (RE), defined as the conditional expectation of next period’s outcome, given all relevant information today and assuming a known distribution, should be forgotten despite its widespread use in economics to model how agents form expectations about future outcomes. This critique applies most forcefully to ‘present value’ calculations involving many future periods. Elementary textbook proofs that the conditional expectation is an unbiased, minimum variance predictor rely on the unstated assumption that the distributions involved remain constant. However, unanticipated shifts of distributions occur intermittently—and far too often to pretend that they do not. Conditional expectations fail to be unbiased or minimum variance predictors in our wide-sense non-stationary world. The financial crisis is just the largest of the most recent shifts, but many smaller unanticipated changes also occur (Uber, driverless cars, Airbnb, Brexit, etc. were all largely unexpected until they occurred). History is replete with examples of distributional shifts both large and small. The most pernicious form of shift is when the previous mean of a distribution changes unexpectedly to a new value, called a location shift. After every location shift, the mean outcome for every variable affected will differ systematically from the so-called ‘rational expectation’. It would therefore be irrational to use such an expectations-formation device. Supposed ‘learning mechanisms’ that enable economic agents to form expectations that converge to the conditional expectation also fail in processes with unanticipated location shifts, as many similar shifts can be generated by very different underlying changes. After the shift, large data samples would be needed to infer what shifted, assuming nothing else changes in the meantime.

Financial Crisis Conditional Expectation Rational Expectation Economic Agent Location Shift
These keywords were added by machine and not by the authors. This process is experimental and the keywords may be updated as the learning algorithm improves.
This is a preview of subscription content, log in to check access.