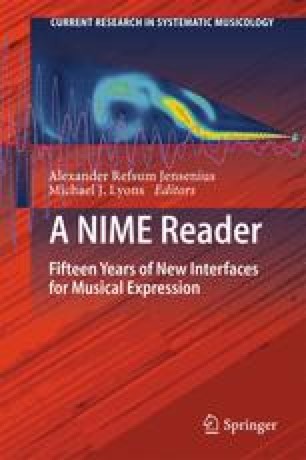 2005: Towards a Dimension Space for Musical Devices

While several researchers have grappled with the problem of comparing musical devices across performance, installation, and related contexts, no methodology yet exists for producing holistic, informative visualizations for these devices. Drawing on existing research in performance interaction, human-computer interaction, and design space analysis, the authors propose a dimension space representation that can be adapted for visually displaying musical devices. This paper illustrates one possible application of the dimension space to existing performance and interaction systems, revealing its usefulness both in exposing patterns across existing musical devices and aiding in the design of new ones.

Dimension Space Space Analysis Musical Process Dimension Plot Musical System
These keywords were added by machine and not by the authors. This process is experimental and the keywords may be updated as the learning algorithm improves.
This is a preview of subscription content, log in to check access.

Our work on characterizing new interfaces for musical expression dates back at least 15 years, to an article published by the last author with Nicola Orio and Norbert Schnell comparing interfaces from semantic (interaction) and system design (engineering) perspectives (Wanderley et al. 2000). We were also aware of a number of other efforts, most notably the 2001 Diplomarbeit of Jörg Piringer which catalogues more than 100 instruments and devices and categorizes them based on immersiveness, expression, and output modalities (Piringer 2001).

This paper started as an exercise during the graduate seminar “Gestural Control of Sound Synthesis” at McGill University in Autumn 2004. (The first three authors were students in the seminar.) The aim of the exercise was to find a simple visual representation for comparing multiple properties of interfaces for musical expression, digital musical instruments, and interactive sound installations. Rather than trying to invent new metrics or descriptors, this representation would reflect the suggestions and judgements of the research field by relating and harmonizing taxonomies found in the existing literature.

For our representation we decided to adapt the “dimension space” approach used by Graham et al. to analyse interactive systems (Graham et al. 2000). While Graham et al.’s work plotted each system from different perspectives and for different contexts, we used a single static dimension space mapped onto a radial plot to increase the “glanceability” of our visualizations. Starting with a list of 16 dimensions gleaned from the literature, we combined related dimensions wherever possible and slowly reduced the set to those most useful for differentiating real instruments, installations, and systems. Priority was given to properties that were less subject to individual interpretation, and axis names were chosen to avoid implication of value judgement.

With a more manageable space of system properties, we set to work informally evaluating different arrangements of axis ordering, polarity, and rotation for understandability, recognizability, and maximal differences in shape between system visualizations. For example, we tried to avoid configurations in which plots of real systems resembled “stars” since we determined that differences between star-shapes were not very legible without detailed investigation. Informal evaluations by colleagues also revealed a common misreading of the six-axis plots as used by Graham et al. as depictions of three-dimensional space rather than radial dimension spaces—to avoid this we adjusted our own spaces to either use an odd number of dimensions or rotate the space so that none of the axes were vertical.

The number of citations received by the paper indicates widespread interest for a fairly small research community. Several more design spaces for musical interfaces have also been suggested, but there is still no generally accepted set of properties for comparing or categorizing music interfaces. The most recent major work we are aware of in this direction is the TIEM project,1 led by Garth Paine and Jon Drummond, and with the collaboration of music technology veterans such as Joel Chadabe (a pioneer of interactive systems), Axel Mulder (Infusion Systems, who developed seminal work in the field during the 1990s), and the last author of this paper. TIEM involves both a detailed survey of existing musical instruments and a public catalogue of contributed instruments and interfaces.

Finally, to celebrate the tenth anniversary of the original publication, we have embedded an interactive version of the dimension space on the IDMIL website.2 It allows visitors to see and compare the plots of more than 170 interfaces, and to search the database simply by drawing a dimension space.

We hope this paper will continue to be useful for other works proposing improved ways to compare musical devices and systems (e.g., Morreale et al. 2014; Malloch et al. 2006). Shedding light into their similarities and differences is a promising way to achieve more developed designs and eventually more rewarding musical instruments and systems.

Expert Commentary: Towards Many Dimension Spaces for Musical Devices

In this paper, the authors propose a novel approach for dealing with two essential questions in the field of New Interfaces for Musical Expression (NIME). The first is that of evaluation: how does one characterize and measure the properties of a musical interface, in order to assess how well it fulfils certain goals and/or compare it with other interfaces? This issue has previously been tackled in different ways, such as defining a formula for “efficiency” of an instrument (Jordà 2003), or by adapting methods from Human Computer Interaction (HCI) for comparing performance on specific musical tasks (Wanderley and Orio 2002). While these approaches offer valuable results, they remain limited in that they impose fixed objectives, whereas actually these objectives may vary due to the very subjective nature of the output, which can depend on context and on the listeners. The current article provides a method enabling a more flexible evaluation of NIMEs. The second question is that of design guidelines: how does one design a musical interface to fulfill specific objectives? Instead of providing a fixed set of rules, the approach presented by the authors enables an incremental and comparative approach to the design of novel musical interfaces.

In their paper, the authors propose the use of dimension space analysis, a method for the visual analysis of systems relying on the notion that all interfaces inhabit a design space defined by a finite set of properties (Graham et al. 2000). Each property is represented using an axis running from the centre point of the graph towards the vertices of a 2D shape. This resulting shape, which depends on the choice and configuration of the axes, allows visual comparison of systems with respect to the design space. Dimension Spaces also permit the evaluation of system tendencies that appear as particular spatial configurations.

In my opinion, the article offers two main contributions. The first is the proposal to use dimension space analysis for understanding and designing musical interfaces. The method appears to be extremely relevant in a field where evaluation criteria depend strongly on the context in which the interface is both used and perceived. Changing the axes and their spatial arrangement allows for easy experimentation with various analyses and comparisons. The article therefore encourages other researchers to create dimension spaces reflecting their own specific analysis needs, for example, by focusing on the scenographic aspect of musical interfaces as was done in (Berthaut et al. 2014). For the design of new interfaces, dimension spaces frees one from relying on a fixed set of rules, and encourages the exploration of transformations of existing interfaces, e.g. “how can we increase the property X of this interface” or “what would this interface become with a shift in all its axes.” This could make the design of new musical interfaces more accessible. The second main contribution of the article is the “seven axes Dimension Space” proposed by the authors. While it is provided as an example, it actually constitutes a set of essential properties that have emerged in a number of previous research works on NIMEs. This dimension space is well-suited for distinguishing between installations and instruments, i.e. between interfaces oriented towards novices and those oriented towards experts. It was therefore perfectly suited for the evaluation of an instrument having multiple levels of expertise (Berthaut et al. 2010).

I agree with the authors’ observation that the subjective axes chosen could be complemented with properties from user studies measurements, and that this constitutes an interesting future work. I would however disagree with the last sentence of the paper, regarding a standard set of axes with which all musical interfaces could be evaluated. In my opinion, an exciting alternative perspective on this work can be gained by considering an extensible and publicly shared set of axes, which could be created and refined collaboratively via an online platform. I believe that new perspectives would arise for the evaluation and comparison of musical interfaces by allowing researchers to: (a) add new axes and properties, (b) discuss the evaluation and measurement of these axes, (c) insert and evaluate new interfaces along the axes, and (d) create dimension spaces from subsets of the axes. Another result of such an approach would be the chronological study of how interfaces evolve regarding specific axes and properties. It could in the long run also allow studies of the potential evolution of the axes themselves, reflecting the changes in priorities and expectations of “NIMErs.”