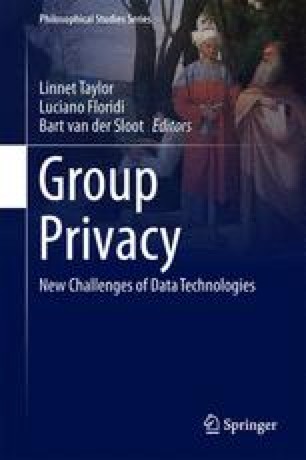 In this chapter I identify three problems affecting the plausibility of group privacy and argue in favour of their resolution. The first problem concerns the nature of the groups in question. I shall argue that groups are neither discovered nor invented, but designed by the level of abstraction (LoA) at which a specific analysis of a social system is developed. Their design is therefore justified insofar as the purpose, guiding the choice of the LoA, is justified. This should remove the objection that groups cannot have a right to privacy because groups are mere artefacts (there are no groups, only individuals) or that, even if there are groups, it is too difficult to deal with them. The second problem concerns the possibility of attributing rights to groups. I shall argue that the same logic of attribution of a right to individuals may be used to attribute a right to a group, provided one modifies the LoA and now treats the whole group itself as an individual. This should remove the objection that, even if groups exist and are manageable, they cannot be treated as holders of rights. The third problem concerns the possibility of attributing a right to privacy to groups. I shall argue that sometimes it is the group and only the group, not its members, that is correctly identified as the correct holder of a right to privacy. This should remove the objection that privacy, as a group right, is a right held not by a group as a group but rather by the group’s members severally. The solutions of the three problems supports the thesis that an interpretation of privacy in terms of a protection of the information that constitutes an individual—both in terms of a single person and in terms of a group—is better suited than other interpretations to make sense of group privacy.

I am very grateful to Massimo Durante for his most valuable comments on a previous draft of this article; to Ugo Pagallo and the participants in the panel “Open Data and Data Protection: Problems and Perspectives”—organised at the conference Computers, Privacy and Data Protection 2014 (CPDP 2014) Reforming Data Protection: The Global Perspective—for their feedback; to the participants in the workshop on group privacy held in Amsterdam on the 8th of September 2014 for valuable discussions; to David Sutcliffe for his skilful copyediting of the final version and many insightful comments that improved it significantly; and to Linnet Taylor for her feedback on a penultimate draft of this chapter, and some enlightening conversations on the topic of group privacy. Her chapter in this volume makes a strong and convincing case for the protection of group privacy in contexts of geolocated data, especially in LMICs (see also (Taylor 2016)).