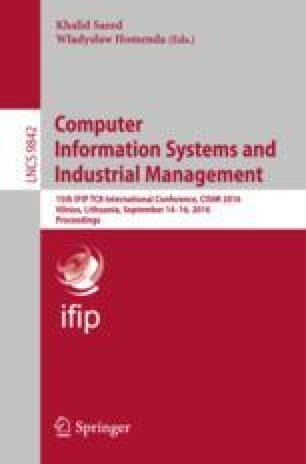 For the contemporary enterprises, possibility of appropriate business decision making on the basis of the knowledge hidden in stored data is the critical success factor. Therefore, the decision support software should take into consideration that data usually comes continuously in the form of so-called data stream, but most of the traditional data analysis methods are not ready to efficiently analyze fast growing amount of the stored records. Additionally, one should also consider phenomenon appearing in data stream called concept drift, which means that the parameters of an using model are changing, what could dramatically decrease the analytical model quality. This work is focusing on the classification task, which is very popular in many practical cases as fraud detection, network security, or medical diagnosis. We propose how to detect the changes in the data stream using combined concept drift detection model. The experimental evaluations confirm its pretty good quality, what encourage us to use it in practical applications.

The analysis of huge volumes and fast arriving data is recently the focus of intense research, because such methods could build a competitive advantage of a given company. One of the useful approach is the data stream classification, which is employed to solve problems related to discovery client preference changes, spam filtering, fraud detection, and medical diagnosis to enumerate only a few.

However, most of the traditional classifier design methods do not take into consideration that:

This section focuses on the first problem called concept drift [23] and it comes in many forms, depending on the type of change. Appearance of concept drift may potentially cause a significant accuracy deterioration of an exploiting classifier. Therefore, developing positive methods which are able to effectively deal with this phenomena has become an increasing issue. In general, the following approaches may be considered to deal with the above problem.

In this work we will focus on the drift detectors which are responsible for determining whether two successive data chunks were generated by the same distribution [9]. In the case the the change is detected the decision about collecting new data to rebuild new model could be made.

As we mentioned above the appearance of concept drift may potentially cause a significant accuracy deterioration of an exploiting classifier [15], what is shown in Fig. 1.
Concept drift detector is an algorithm, which on the basis of incoming information about new examples and their correct classification or a classifier’s performance (as accuracy) can return information that data stream distributions are changing. The currently used detectors return only signal about drift detection, which usually requires a quick classifier’s model updating or that warning level is achieved, which is usually treated as a moment that new learning set should be gathered (i.e., all new incoming examples should be labeled). The new learning set is used to update the model is drift is detected. The idea of drift detection is presented in Fig. 2
The drift detection could be recognized as the simple classification task, but from practical point of view detectors do not use the classical classification model. The detection is hard, because on the one hand we require quick drift detection to quickly replace outdated model and to reduce so-called restoration time. On the other hand we do not accept false alarms [8], i.e., when detector returns that change appears, but it is not true. Therefore to measure performance of concept drift detectors the following metrics are usually used:

In some works, as [2], aggregated measures, which take into consideration the mentioned above metrics, are proposed, but we decided not to use them because using aggregated measures do not allow to precisely analyse behavior of the considered detectors.

3 Description of the Chosen Drift Detectors

Let us shortly describe selected methods of drift detection, which later will be used to produce combined detectors.

CUSUM [17] detects a change of a given parameter value of a probability distribution and indicated when the change is significant. As the parameter the expected value of the classification error could be considered, which may be estimated on the basis of labels of incoming objects from data stream. The detection condition looks as follows
$$\begin{aligned} g_t=max(0, g_{t-1}+\epsilon _t-\xi )>treshold \end{aligned}$$
(7)
where \(g_0=0\) and \(\epsilon _t\) stands for observed value of a parameter in time t (e.g., mentioned above classification error). \(\xi \) describes rate of change. The value of treshold is set by an user and it is responsible for detector’s sensitivity. Its low value allows to detect drift quickly, but then a pretty high number of false alarms could appear [2, 5].

It is modification of the CUSUM algorithm, where the cumulative difference between observed classifier error and its average is taken into consideration [20].

The interesting drift detectors based on non-parametric estimation of classifier error employing Hoeffding’s and McDiarmid’s inequalities were proposed in [3].

Let’s present three combination rules which allow to combine the concept drift detector outputs. Because this work focuses on the ensemble of heterogeneous detectors, therefore only the combination rules using drift appearance signal are taken into consideration.

4.2 ALHD (At Least Half of the Detectors Detect Drift)

Committee of detectors makes a decision about drift if each individual detector returns decisions that drift appears.
$$\begin{aligned} ALHWD(\varPi ,x)=\left\{ \begin{array}{cl} 0 &{} \sum \nolimits _{i=1}^n [D_i(x)=2]<n\\ 1 &{} \sum \nolimits _{i=1}^n [D_i(x)=2]\geqslant n \end{array} \right. \end{aligned}$$
(12)
Let’s notice that proposed combined detectors are de facto classifier ensembles [25], which use deterministic (untrained) combination rules. They do not take into consideration any additional information as about individual drift detector’s qualities. In this work, we also do not focus on the very important problem how choose the valuable pool of individual detectors. For classifier ensemble such a process (called ensemble selection or ensemble pruning) uses diversity measure [14], but for the combined detectors the measures have been using, thus far is impossible, because of different nature of the decision task.

The main objective of the experimental study was evaluating the proposed combined concept drift detectors and their comparison with the well-known simple methods. To ensure the appropriate diversity of the pool of detectors we decided to produce an ensemble on the basis of five detectors employing different models presented in the previous section. For each experiment we estimated detector sensitivity, number of false alarms and computational complexity of the model, i.e., commutative running time.

We used the following models of individual detectors:

As we mentioned above we use the individual detectors to build three combined ones based on the ALO, ALHD, and AD combination rules.

All experiments were carried out using MOA (Massive Online Analysis)3 and our own software written in Java according to MOA’s requirements [1].

For each experiment 3 computer generated data streams were used. Each of them consists of 10 000 examples:

The stationary data stream (without drift) was chosen because we would like to evaluate the sensitivity of the detector, i.e., number of false alarms.

The results of experiment were presented in Tables 1, 2 and 3.4
Table 1.

Results of experiment for data stream with sudden drift

Results of experiment for data stream with gradual drift

Results of experiment for data stream without drift

Firstly we have to emphasize that we realize that the scope of the experiments was limited therefore drawing the general conclusions is very risky. For each experiments the detector based on Hoeffding’s inequality (HDDM_W) [3] outperformed other models. The combined detectors have not behaved well for sudden and frequent drift (see Table 1), because some of them (as ALO) has to low sensitivity or so high sensitivity (as for AD) caused a high number of false alarms. The computation time of AD detector was similar as in the case of HDDM_A or HDDM_W, but as we mentioned before the number of false alarms was not acceptable. For gradual drift the combined detectors ALHD and AD behaved similar as individual detectors. For stationary stream they have not presented so high sensitivity (similar as individual detectors). Probably, not so impressive results of combined detectors have been caused by the fact that we nominated the the individual models arbitrary and we did not check how adding or removing detector from the pool could impact on the combined detector quality. Additionally, HDDM_W and HDDM_A detectors strongly outperformed other models, what could cause that the decision of the detector ensemble was the same as the dominant models. The similar observation has been reported for the classifier ensemble using deterministic combination rules. On the basis of the experiment we are not able to say expressly if the combined concept drift detectors are promising direction. Nevertheless, we decided to continue the works on such models, especially for a pool of homogeneous detectors and method which are able to prune the detector ensemble. We have also to notice the main drawback of the proposed models, which are more complex than single ones. On the other hand we have to notice that using the proposed method of parallel interconnection is easy to parallelize and could be run in a distributed computing environment.

In this work three simple combination rules for combined concept drift detectors were discussed and evaluated on the basis of the computer experiments for different data streams. They seem to be an interesting proposition to solve the problem of concept drift detection, nevertheless the results of experiments do not confirm their high quality, but as we mentioned above it is probably caused by very naive choice of the individual models of the detector ensemble.

It is worth noticing that we assume the continue access to class labels. Unfortunately, from the practical point of view it is hard to be granted that labels are always and immediately available, e.g., for credit approval task the true label is usually available ca. 2 years after the decision, then such labeled example could be worthless as come from outdated model. Therefore, during constructing the concept drift detectors we have to take into consideration the cost of data labeling, which is usually passed over. It seems to be very interesting to design detectors on the basis of a partially labeled set of examples (called active learning) [7] or unlabeled examples. Unfortunately, unsupervised drift detectors can detect the virtual drift only, but it is easy to show that without access to class labels (then we can analyse the unconditionally probability distribution only f(x)) the real drift could be undetected [21].

This work was supported by the statutory funds of the Department of Systems and Computer Networks, Faculty of Electronics, Wroclaw University of Science and Technology and by the Polish National Science Centre under the grant No. DEC-2013/09/B/ST6/02264. This work was also supported by the AGH Statutory Funds No. 11.11.230.017. All computer experiments were carried out using computer equipment sponsored by ENGINE project (http://engine.pwr.edu.pl/).