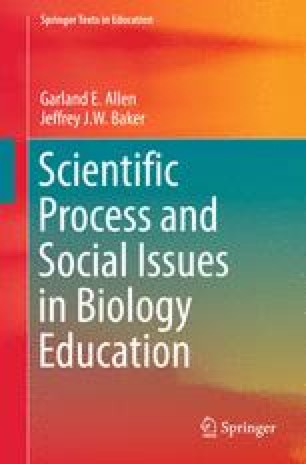 The Nature and Logic of Science

This chapter provides the basic foundation for understanding the logic involved in scientific/biological reasoning. Topics include: inductive and deductive logic, hypothesis formulation (if … then reasoning), the concept of “proof” in science, and the difference between truth and validity. The interplay of these elements are illustrated by the “dissection” of a specific set of investigations by Italian biologist Lazzaro Spallanzani in the eighteenth century concerning what elements of the male semen were causally involved in fertilization and embryonic development in animals. The chapter then moves to a discussion of the way in which hypotheses are formulated as different kinds of explanations in biology, such as teleological versus causal explanations, all illustrated by the question of why warblers begin to migrate south from New England in the fall. This section also examines some of the recent philosophical studies on the nature of mechanisms in biology, and what elements are necessary for a mechanism to be successful as part of a scientific explanation. After discussing the nature of cause-and-effect in biology, and how causal relationships can be distinguished from simply correlations or accidental coincidences, the nature of bias in science is introduced to emphasize that science cannot eliminate all bias, and indeed that sometimes biases (or points of view) are extremely fruitful. The final part of the chapter is devoted to philosophical issues in biology: the nature of paradigms and paradigm shifts in biology, the materialist (as opposed to idealist) foundations of modern biology, and a review of both the strengths and weaknesses of science.

Paradigm Shift Rous Sarcoma Virus Deductive Logic Vitalist Debate Scientific Hypothesis
These keywords were added by machine and not by the authors. This process is experimental and the keywords may be updated as the learning algorithm improves.
This is a preview of subscription content, log in to check access.