A Statistical and Multi-wavelength Study of Star Formation in Galaxies 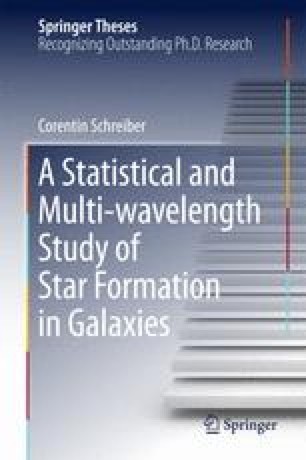 The Downfall of Massive Star-Forming Galaxies During the Last \(10\,\mathrm{Gyr}\)

In this chapter I discuss in more detail one of the observation that was reported in Chap.  2 (Schreiber et al, A&A, 575:A74 2015). By measuring the correlation between the \(\mathrm{SFR}\) and the stellar mass (\(M_*\)) (a.k.a. the Main Sequence) of a mass-complete sample of galaxies, I found that the slope of the correlation was evolving with both redshift and stellar mass.

Star Formation Main Sequence Stellar Mass Star Formation Rate Initial Mass Function
These keywords were added by machine and not by the authors. This process is experimental and the keywords may be updated as the learning algorithm improves.
This is a preview of subscription content, log in to check access.

It has been shown that the properties of the \(\mathrm{SFR}\)–\(M_*\) relation, i.e., its slope but also its scatter, are very sensitive to the sample selection (e.g., Speagle et al. 2014). In the present paper, we have used the standard \(UVJ\) color–color diagram to isolate quiescent galaxies, and although this selection has been widely used in the recent literature (e.g., Whitaker et al. 2012, 2014; Muzzin et al. 2013; Bruce et al. 2014; Lang et al. 2014; Straatman et al. 2014; Pannella et al. 2015), its reliability can still be questioned. Indeed, while the quiescent and star-forming clouds can be easily identified on this diagram (see, e.g., Fig. 5.5), there is a non-negligible amount of galaxies in between, populating what is often referred to as the “green valley”. The dividing line defined by Williams et al. (2009) goes arbitrarily through this population, and it would be unwise to consider blindly that a “green valley” galaxy slightly above that line is quiescent, and that a similar galaxy slightly below the line is star-forming.

One way to circumvent this issue is not to apply any selection of star-forming galaxies in the first place, and identify the Main Sequence as the ridge (or mode) of the distribution of galaxies on the \(\mathrm{SFR}\)–\(M_*\) plane. This was done, e.g., in Magnelli et al. (2014) and Renzini and Peng (2015). However this approach is only feasible in samples that are not \(\mathrm{SFR}\)-selected. Building such a sample requires using \(\mathrm{SFR}\)s that are not fully based on the FIR, and that are therefore potentially unreliable (one exception is the deep H\(_\alpha \) data of the SDSS, as in Renzini and Peng (2015) but translating this study to the distant Universe is currently out of our reach). Of course, this is also not applicable to stacking analyses, for which the \(\mathrm{SFR}\) is only determined a posteriori.

Coming back to the \(UVJ\) selection, there are two ways our study could be affected by this arbitrary dividing line. On the one hand, the selection may be too strict, and we could actually discard from our sample some galaxies that are still forming stars at non-negligible rates, but have colors similar to that of quiescent galaxies because of peculiar combination of star formation history and dust content. On the other hand, the selection may be too loose, and our “star-forming” sample could actually contain a number of quiescent galaxies. We expect both effects to take place mostly for the most massive galaxies, where dust is more abundant and where most quiescent galaxies are found. The first alternative can be addressed by looking at Fig. 5.7, on which we show the position of both \(UVJ\) star-forming and \(UVJ\) quiescent galaxies in the \(\mathrm{SFR}\)–\(M_*\) plane. One can see that there are indeed a few genuinely star-forming galaxies that are classified as \(UVJ\) quiescent. However, as can be seen from the running median, these galaxies tend to have systematically lower star formation rates compared to \(UVJ\) star-forming galaxies. Therefore, including these mistakenly identified galaxies in our sample would likely flatten the Main Sequence even more. Consequently, it is also unlikely that this would change dramatically the average \(\mathrm{SFE}\). The second alternative is probably more worrisome, as the drop of the \(\mathrm{SFE}\) we observe in massive galaxies could be created by quiescent galaxies polluting our sample. One interesting observation to make out of Fig. 5.7 (and that can be made more quantitatively by studying the distribution of \(\mathrm{SFR}\) around the median value, Ilbert et al. 2015; Schreiber et al. 2015) is that the mode of the \(\mathrm{SFR}\) distribution at a given stellar mass (approximated here by the running median) coincides with the average value obtained from the stacked measurements. This means that, although our sample is \(\mathrm{SFR}\)-selected, the amount of galaxies below our \(\mathrm{SFR}\) detection limit is small enough that their impact on the average trend is marginal. In fact, for galaxies more massive than \(5\times 10^{10}\,\mathrm{M}_\odot \), where the bending of the sequence is most pronounced, \(79\,\%\) of the \(UVJ\) star-forming galaxies are detected in the FIR. Therefore, the contamination of genuinely quiescent galaxies to the \(UVJ\) star-forming sample in this stellar mass range must be reasonably small (i.e., a maximum of \(20\,\%\)).

Nevertheless, in an attempt to quantify how our results are influenced by the choice of the \(UVJ\) dividing line, we replicate our \(\mathrm{SFE}\) measurements by stacking two different additional samples which are built by slightly shifting the \(UVJ\) dividing line by \(\pm 0.1\) magnitude. The resulting \(\mathrm{SFE}\) and \(f_\mathrm{gas}\) are shown in Fig. 5.13. As can be seen from this figure, moving the dividing line further into the quiescent cloud (red points) or further into the star-forming cloud (blue points) does not impact \(f_\mathrm{gas}\) in any statistically significant way. In both cases, we still observe a drop of \(\mathrm{SFE}\), although the amplitude of this drop does vary, in this case mostly because of a change of \(\mathrm{SFR}\).

This can be put in perspective with the work of Arnouts et al. (2013), who found that the \(\mathrm{sSFR}\) of a galaxy could be inferred from its position on the NrK diagram, which is conceptually similar to the \(UVJ\) diagram,8 with an \(\mathrm{sSFR}\) that is continuously increasing as a function of the distance to the dividing line. According to Arnouts et al. (2013), using a stricter \(UVJ\) selection should bias our sample toward galaxies with a higher \(\mathrm{sSFR}\), hence, at fixed mass, with a higher \(\mathrm{SFR}\), which is what we observe for the most massive bin. In this context, the fact that the gas mass does not change substantially is particularly interesting, and is another hint that the mechanism responsible for the downfall, whatever it is, is mostly impacting the \(\mathrm{SFE}\), and not the gas supply.