A Quarter Century of Post-Communism Assessed 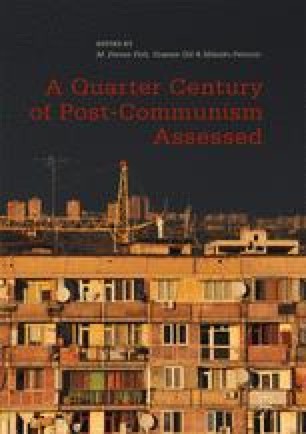 During the quarter century following the collapse of communist regimes in Eastern Europe and Eurasia, the successor states have followed a wide diversity of development paths. While some countries have largely fulfilled the hopes that accompanied the communist demise, other countries have fallen far short. Some have become full-blown democracies, while others are still struggling to implement transitional reforms or have merely exchanged the Soviet-type dictatorship for another form of harsh authoritarianism. Some countries have followed dramatically different paths of economic reform as well. Some have embraced rapid, thoroughgoing reform, while policy change in others has been halting and uncertain. Patterns of economic development have varied as well. Some countries have traveled a long way toward convergence with their Western neighbors, experiencing substantial and steady growth of output and marked improvement in infrastructure. Other countries have posted less impressive gains.

Communist Regime Western Balkan Country Democracy Promotion Democracy Score Balkan State
These keywords were added by machine and not by the authors. This process is experimental and the keywords may be updated as the learning algorithm improves.
This is a preview of subscription content, log in to check access.