The Social Developmental Construction of Violence and Intergroup Conflict 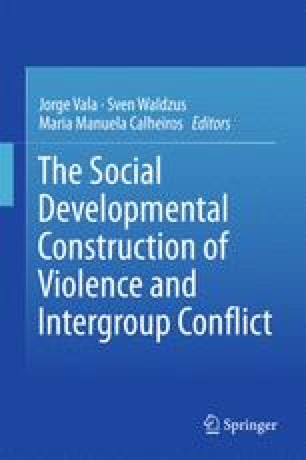 This chapter presents a new complete theoretical model of intergroup attitudes of children—the Multi-Norm Structural Social-Developmental (MNSD) model. The MNSD offers a comprehensive and integrative approach that builds on three extant social-developmental theories that explain the dynamic variation of prejudiced responses during child development. The unique contribution of MNSD is in integrating hypotheses on the role of competing social norms, using social-developmental and social psychological theory. The MNSD proposes that two strong social norms, the ingroup loyalty norm and the norm not to be prejudiced (outgroup fairness norm), operate in a complementary rather than mutually exclusive way in social-developmental intergroup contexts. In specifying when and how these norms become influential and shape intergroup biases of children, the MNSD proposes two kinds of hypotheses, one regarding lasting changes in the availability and internalization of these norms and one regarding the situational and context dependent salience of them. With this the authors explain existing results and generate novel untested systematic hypotheses on how the dynamic relationship between groups’ complex normative repertoires and socio-structural variables proposed by social identity theory (status differences, their stability and legitimacy) might operate insidiously to protect or reify the status quo within asymmetric intergroup contexts.

…we discussed the importance of the generic ‘groupness’ norm … [but] All our results show that another social norm, that of fairness, is also powerful in guiding … choices and that the pattern of data can best be understood as showing a strategy in which a compromise between these two norms is achieved whenever possible.

Double-dealing, like double-talk, is hard to learn. It takes the entire period of childhood and much of adolescence to master the art of ethnocentrism.