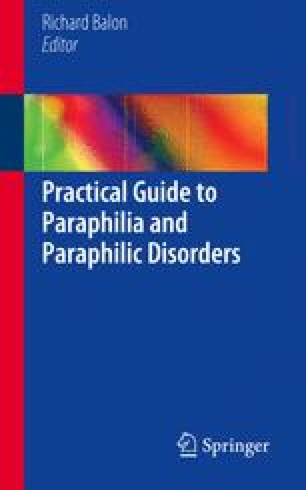 In psychiatry, sexuology, and sexual medicine, voyeurism/voyeuristic disorder is conceptualized as a condition characterized by deriving intense and recurrent sexual arousal from watching unsuspecting person(s) while they are having sex, disrobe, or are nude. It has been classified as one of the exploitive paraphilias/paraphilic disorders. Acts of voyeurism are probably the most common of potentially law-breaking sexual behaviors (Arch Sex Behav 39:317–324, 2010). Voyeurism in contemporary psychiatry and sexual medicine terms should not be confused with the popular culture definition of voyeurism. As Metzl (Harv Rev Psychiatry 12:127–131, 2004) pointed out, popular definitions of voyeurism are as broad as psychiatric definitions are narrow. He notes the difference between a “relatively expansive category of acceptable voyeurism” which is a late twentieth-century phenomenon and a narrow category of pathological voyeurism and voyeuristic disorder in the psychiatric sense. Metzl (Harv Rev Psychiatry 12:127–131, 2004) further writes that while “contemporary American psychiatry seems to struggle to identify a population of voyeurs who are, in fact, sick enough to require treatment with psychotherapy and psychotropic medication… evidence also suggests that the notion of voyeurism has limited relevance in a world where it is at times difficult to distinguish hard-core paraphiliacs who require psychiatric interventions from the many amateurs who simply watch VTV (“voyeurism TV”) programs.” The notion of pathological and “normal” voyeurism and the difference between those two terms/entities is very important, as the line between pathology and what our society considers “normal” or acceptable is becoming more blurry.

It seems that many so-called “normal” people have a tendency to be involved in voyeurism in the sense that psychiatry considers paraphilia or paraphilic tendencies. We have no data on how many people watch adult pornography over the Internet or through other technological means, but it seems that the pornography industry is flourishing. Are all those who watch people disrobing or having sex voyeurs? Are we a voyeur nation/culture that just does not want to admit it? Are many of us voyeurs just afraid of being caught or admit it? In an interesting study Rye and Meaney (Int J Sex Health 19:47–56, 2007) tried to determine whether “normal” people would engage in voyeurism. They asked university students about the likelihood of them secretly watching an attractive person undressing or two attractive people having sex, both being hypothetical situations. The chance of being caught was manipulated (e.g., 0, 10, or 25 %). The participants in this study (aptly called “Voyeurism: it is good as long as we do not get caught”) reported a willingness to watch an attractive person undress, provided they would not be caught. Fewer participants (more males than females) reported a willingness to watch a sexual activity under similar circumstances. When the risk of being caught increased, the likelihood of watching decreased (from 84 to 61 % in men, and from 74 to 36 % in women). These findings shed a little bit of light on the question of whether many people have a tendency toward voyeurism. However, these findings also raise questions about the definition (DSM and ICD) of voyeurism/voyeuristic disorder and what Downing (Arch Sex Behav 44:1139–1145, 2015) calls DSM bias in favor of heteronormativity and reproduction.

Medroxyprogesterone Acetate Cyproterone Acetate Leuprolide Acetate Sexual Excitement Pedophilic Disorder
These keywords were added by machine and not by the authors. This process is experimental and the keywords may be updated as the learning algorithm improves.
This is a preview of subscription content, log in to check access.