A Global Overview of the Conservation of Freshwater Decapod Crustaceans 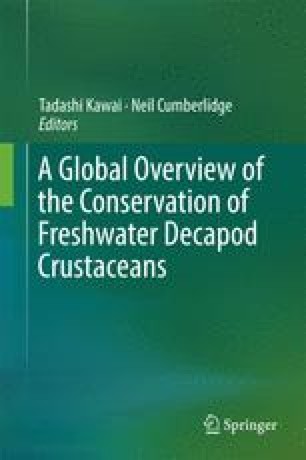 The history of the study of the biology of freshwater crabs is described from the first records in ancient Greece up to the present day. Today, hundreds of scientists from all parts of the world are engaged in the study of all aspects of freshwater crab biology from field studies of their ecology to molecular studies of their systematics and genetics. The first mention of the occurrence of freshwater crabs is by the Roman author Claudius Aelianus, then Aristoteles, Belon, Linne, A. Milne-Edwards, James wood-Mason, Mary Jane Rathbun, Major Alfred Alcock, Stanley Kemp, Jean Roux, Heinrich Balss, and Richard Bott in Europe developed the study.

Sadly, the author of this chapter, Professor Michael Türkay, passed away just before completing the manuscript. The editors have taken the liberty of putting the finishing touches to this work, which is the final manuscript in the long and productive academic career of this great scientist, whose numerous contributions to crustacean biology have helped to lay the foundations of our present understanding of the field.

Professor Michael Türkay passed away suddenly on 9th September 2015 in Frankfurt am Main, Germany, immediately before submitting the manuscript of his chapter on the history of freshwater decapods (Sect. 4.1, this volume). The second author (MS) was a colleague of MTs at the Senckenberg Research Institute in Frankfurt and completed the unfinished manuscript along with one of the editors (NC). The following is an account of MTs contributions and leadership in the field of freshwater decapod biology.

In August 2014 the first author (TK), visited Professor Michael Türkay (MT) the Curator of the Crustacean Section at the Senckenberg Research Institute and Natural History Museum in Germany (hereafter Senckenberg Museum) who was hosting the 8th International Crustacean Congress (ICC-8). TK and MT discussed the history of freshwater decapod systematics and the natural history of freshwater crayfish, and the importance of the museum’s collection of crayfish. This meeting is summarized here to make it available to other scientists interested in the biology of freshwater decapods, and to serve as an illustration of Michael Türkay’s vast knowledge of crustacean biology.

Michael Türkay succeeded Dr. Richard Bott as the Curator of the Crustacean Section of the Senkenberg Research Institute (Türkay 1974a, b, 1975). At that time Dr. Bott was one of the most accomplished freshwater crab taxonomists and had also published the first comprehensive revisionary work on Europe’s freshwater crayfish (Decapoda: Astacidae) (Bott 1950). Freshwater crayfish (Astacidae, Cambaridae, and Parastacide) are a monophyletic group (Scholtz 1995) of exclusively freshwater decapods that are never found in marine environments (Crandall et al. 2000; Scholtz 2002). The distribution of crayfish worldwide is disjunctive: for example, astacid species are found only in northwestern North America and in western Europe but this family is absent from the rest of the USA. Bott tried to answer this enigmatic distribution of astacid crayfish but found it difficult to collect samples in Europe immediately after the end of World War II. But despite this, he collected samples of Pacifastacus leniusculus from the Pacific northwest of the USA with the help of the French Army, and these specimens are still in the Crustacean collection of the Senckenberg Research Institute (Fig. 4.1). While collecting in the USA Dr. Bott hid his collecting equipment (including a microscope) under a large winter overcoat, and managed to publish detailed taxonomic revisions of astacid crayfish. Dr. Bott established the American astacid genus Pacifastacus based on his specimens from North America that contributed to his systematic studies of the European astacid species of Astacus and Austropotamobius. This taxonomic work is still one of the best taxonomic contributions of its time that was produced at a time when relations between Germany and other European countries and the U.S.A. were still delicate immediately following the end of World War II.

The efforts of Dr. Bott to establish international partnerships that contribute to the understanding of crustacean systematics and morphology were continued by his successor, MT, who was already known for his friendship with Japan. MT visited Japan in 1979 to meet the past president of the Carcinological Society of Japan, Dr. Tune Sakai, and they subsequently established a productive scientific partnership, including the gift of a large number of specimens of crustaceans collected by Dr. Sakai that are now in the Senckenberg Museum as the “Tune Sakai Collection”. Dr. Sakai also gave MT his Japanese name “美蛙鶴飼” (meaning keeper of beautiful frogs and cranes (birds)) (Türkay 1981, 1987).

MT spent a great deal of time promoting developments in crustacean research including hosting large international conferences such as the 21st International Senckenberg-Conference on the Biology of Freshwater Decapods (2010), and the ICC-8 world congress (2014) that were of immense value to the entire international scientific community. It was during the world crustacean congress (ICC-8) on the 3rd day of the conference that MT became ill. Despite this setback he was eager to return, telling his wife Heide: “I must get better and go back to the conference”. The sharing of knowledge throughout the international crustacean community was a great passion in his life. After the conference MT gave the first author souvenir gifts from the ICC-8 that bore his signature, and indicated that these could be sold at a charity auction to raise support for research on crustacean biology. There is no doubt that Michael Türkay’s contributions to crustacean science deserve to be recognized by carcinologists worldwide.

Besides organizing the ICC world congress in 2014, Michael Türkay also organized the 21st International Senckenberg-Conference in 2010 on the Biology of Freshwater Decapods in Frankfurt am Main from December 8–10. There were 45 full participants from 10 countries and five continents at the conference who presented 27 papers and/or 12 posters on recent taxonomy, phylogenetics, biogeography, life history, and conservation of freshwater crabs, anomurans, prawns, and crayfish. The proceedings of the conference were published in a book entitled: “Advances in Freshwater Decapod Systematics and Biology” that was edited by Darren Yeo, Neil Cumberlidge, and Sebastian Klaus, and published by Crustaceana Monographs 19, Brill, 296 pp.

Michael Türkay authored over 300 publications, The following is a list of publications by MT that focus on freshwater decapods.

The following is a collection of biographies of carcinologists who have contributed to the present-day knowledge of freshwater crab systematics.