Tracking the Literature of Tropical Weather 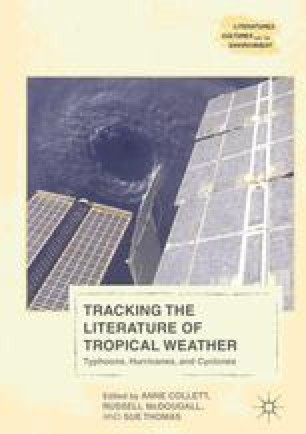 Tracking the Literature of Tropical Weather pp 227-250 | Cite as

Chapter
Part of the Literatures, Cultures, and the Environment book series (LCE)

This chapter analyses the figurative reach of the hurricane in the work of two white Creole writers—Antiguan William Gilbert and Jamaican Diana McCaulay—as they confront the violence of Caribbean modernity, a history that Kamau Brathwaite characterizes as catastrophic. In Gilbert’s poem and part spiritual autobiography The Hurricane: A Theosophical and Western Eclogue (1796) and McCaulay’s novel Huracan (2012) racialized political and cultural vision is exercised in the imagining of recovery in the wake of “natural” disaster. Thomas addresses the scope and limits of repair as envisaged and mediated in plots of desire and romance in both texts.

Slave Trade White Skin Black Skin Romantic Colonization Romantic Poet
These keywords were added by machine and not by the authors. This process is experimental and the keywords may be updated as the learning algorithm improves.
This is a preview of subscription content, log in to check access.