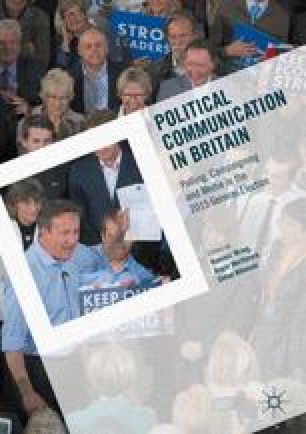 Michael Crick provides insight from his vantage point as a leading broadcast correspondent who attempted to interpret the campaign for viewers while simultaneously having to deal with overprotective party representatives who were keen to manage access to their leaders. Consequently ordinary voters were conspicuous through the absence at a series of carefully controlled, supposedly media friendly events. The chapter also reflects on television journalism’s broader contribution to the reporting of the election and particularly the challenges created by social media as well as the need to respond to the increasingly prominent ‘smaller’ parties who added an important dimension to this campaign.

Party Leader Press Conference Major Party Green Party Downing Street
These keywords were added by machine and not by the authors. This process is experimental and the keywords may be updated as the learning algorithm improves.
This is a preview of subscription content, log in to check access.