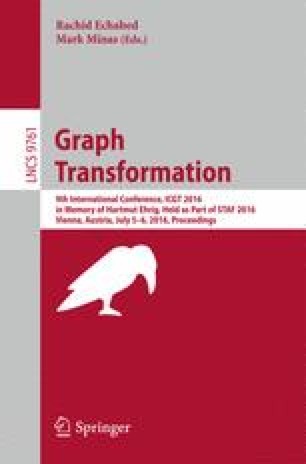 The Incremental Advantage: Evaluating the Performance of a TGG-based Visualisation Framework

Triple Graph Grammars (TGGs) are best known as a bidirectional model transformation language, which might give the misleading impression that they are wholly unsuitable for unidirectional application scenarios. We believe that it is more useful to regard TGGs as just graph grammars with “batteries included”, meaning that TGG-based tools provide simple, default execution strategies, together with algorithms for incremental change propagation. Especially in cases where the provided execution strategies suffice, a TGG-based infrastructure may be advantageous, even for unidirectional transformations.

In this paper, we demonstrate these advantages by presenting a TGG-based, read-only visualisation framework, which is an integral part of the metamodelling and model transformation tool eMoflon. We argue the advantages of using TGGs for this visualisation application scenario, and provide a quantitative analysis of the runtime complexity and scalability of the realised incremental, unidirectional transformation.

This work has been funded by the German Research Foundation (DFG) as part of projects A01 within the Collaborative Research Centre (CRC) 1053 – MAKI.

Appendix: Examples from the eMoflon Handbook

We show concrete examples of visualised source models taken from the eMoflon handbook,7 whose illustrative example is Leitner’s learning box, a system, e. g., for language learning. This system works by creating cards, sorted into sequential partitions, with a front face showing the known word (e. g., “hello” in English) and a back face showing the to-be-learnt word (e. g., “Hallo” in German). While exercising, the learner takes a card from a partition, tries to guess the back-face word based on the front-face word, and, if successful, may move the card to the next partition. A so-called fast card contains easy-to-learn words and may be moved to the last partition upon success, immediately.

The story diagram in Fig. 4a shows the logic of checking a card: If the answer is correct (story pattern checkCard) and if the card is a so-called fast card (story pattern isFastCard), then this card is promoted to the last partition, as shown in the story pattern depicted in Fig. 4b.

Another task in the eMoflon handbook is to synchronise (using TGGs) a learning box with a dictionary, whose entries can be thought of as simple key-value pairs. Figure 4c shows the precedence graph resulting from translating the sample box in the handbook into a dictionary. The root node BoxToDictionaryRule 0 indicates that the box is first of all translated into an empty dictionary, before translating all cards to dictionary entries. Finally, Fig. 4d depicts the triple match that corresponds to CardToEntryRule 5 in Fig. 4c. This match shows that the card containing “Question One” is mapped to the entry with content “One : Eins”.