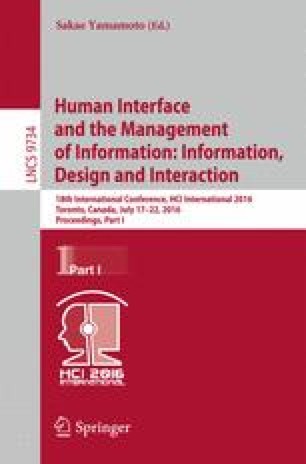 HIMI 2016: Human Interface and the Management of Information: Information, Design and Interaction pp 556-562 | Cite as

Head-mounted displays (HMDs) that feature a stereoscopic wide-viewing angle and head-tracking function for virtual reality environments have emerged recently. As a result of this development, various contents that use the special qualities of HMDs have begun to be produced suddenly. In this study, we propose a short horror movie for HMDs using a free viewpoint that takes advantage of the features of the head-tracking system.

Head-mounted displays (HMDs) that feature a stereoscopic wide-viewing angle and head-tracking function for virtual reality (VR) environments have emerged recently. A head-tracking system enables the display to follow the movement of a user’s head. As a result of this development, various contents that use the special qualities of HMDs have begun to be produced suddenly. HMDs evoke a strong absorbing sense; thus, they are suitable for the production of horror movies. In this study, we propose a short horror movie for HMD that uses a free viewpoint that takes advantage of these features. We create the movie using Oculus Rift VR Development Kit 2.

In directing the horror scenes, we use as reference the “perfect formula” for horror movies as published by King’s College London in 2004. This formula indicates that the most important factors of the genre are escalating music, a sense of the unknown, and chase scenes. We direct the horror gimmicks based on this formula.

2 Countermeasure to Problem of HMD

HMD has various advantages that bring a sense of absorption in VR. However, it also has several disadvantages. In this study, we thoroughly consider the way to address such disadvantages.

The main problem with an HMD is that it easily causes three-dimensional drunkenness that affects the viewer’s physical condition. As a result, when users feel the acceleration, they experience vestibular sense and nausea in addition to visual perception. When wearing an HMD, a person may experience 3D drunkenness, which involves a sense of collision, because only two eyes are used while three senses are functioning. The following three situations illustrate how HMD drunkenness occurs:

We have to consider safety when wearing an HMD because the user cannot see the surroundings. For example, using the device poses a risk of contact when other people or objects are near the viewer. Furthermore, if the viewer is standing while wearing the HMD, his/her body could become unsteady when the vestibular sense is paralyzed.

Compatibility with Other Devices

A viewer cannot see his/her own hand because Oculus Rift is a non-transparent type of HMD. Therefore, its compatibility with other devices, such as keyboards and controllers, is not good. A viewer who is unaccustomed to keyboards or controllers may have difficulty knowing where certain buttons are located without looking at one’s hands. Additionally, once the viewer loses control, he/she has to grab the controllers.

3 Solution to the Problem in HMD

In this study, the following method is conducted to solve the problem stated in Sect. 2.

The following three approaches are considered to reduce 3D drunkenness:

As mentioned, we have to consider safety because the viewers are unable to see their surroundings while wearing the HMD. For example, when another person or an object is near the viewer, the risk of physical contact occurs. Moreover, the viewer’s vestibular sense is paralyzed when using the HMD while standing, so that his/her body is unsteady and in danger of collapsing. To solve this problem, we prepare a stable chair for the viewer to sit on while playing the movie.

Solution to Incompatibility with Other Devices

Parallel use of Oculus Rift and other devices is difficult because of incompatibility. Therefore, we produce a movie that has no room for the player to control. Other devices are unnecessary because the viewer does not have to operate a character to watch the movie.

The entire movie is set in an old and dark hospital. The stage, materials, and gimmicks are built using Unity 3D. The hospital is a two-story building, and the audience rides a coaster and moves from the first to the second floor. A map of the stage is shown in Fig. 2. To the left is the first floor, and to the right is the second floor.
The stage is designed to accommodate the route of the coaster. The coaster passes the doors many times, and the backs of the doors are difficult to see. Thus, the viewer cannot see an upcoming frightening scene. We also made the coaster move straight as much as possible to avoid a measure of 3D drunkenness, and we set the number of corners to a minimum. The route is presented in Fig. 3.

One of the most important features of this movie is that the players are able to see any direction across a viewing angle of 360°. This condition means that we have to lead the players’ eyes such that they can witness and encounter the scary scenes in the movie. In this study, we choose the occurrence of sudden sounds based on the “perfect formula” of the horror genre. For example, we devise a loud banging sound that causes the player to turn his/her head toward the direction from which the sound is coming. At the same time, a red handprint with blood appears on the wall, as shown in Fig. 4.

We set the surround speaker system so that the sudden sound may also occur from behind the viewer. When the sound occurs behind the viewer, he/she is able to turn his/her head to see what is happening at the back of the stage.

In contrast to watching a usual display, the scenery spreads out across an angle of 270° in Oculus Rift, and the audience feels an extreme sense of blockade when they are shut in a small space. People develop a sense of fear in such a closed and small space. In this project, the fear is directed by shutting the audience in a small elevator.

A comparison between Figs. 5 and 6 shows that a view from a low position gives the viewer a sense of expanse on the stage. Thus, the viewer senses that the viewpoint is weak. The height of the point of view is set to approximately 120–130 cm in this project.

One gimmick is that an unidentified ghost attacks the player at the end of the movie. The HMD shows the ghost approaching the player from the front and coming several centimeters close to him/her. The ghost attacks by hanging from the top so that it looks as huge as possible, as shown in Fig. 8.

A three-minute horror movie using HMD, which takes advantage of the features of the head-tracking system, was created. We sent questionnaires to the viewers after the viewing and obtained answers such as the following: “I experienced a highly realistic sensation that cannot compete with [the feeling from] any other conventional horror movie” and “I enjoyed the fearfulness of the unfolding actions as I changed viewpoints.” This production succeeded in evoking the characteristic fear that is induced by horror movies. However, further applications of the head-tracking function should be explored.