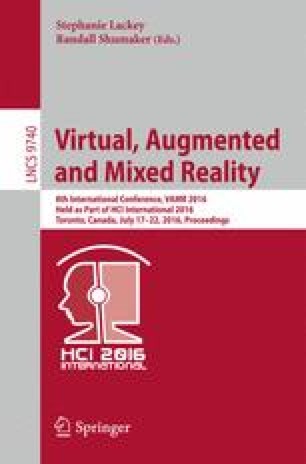 iBeacons provide location-based tracking that can act as a powerful tool in data collection as well as design for alternate reality gaming. Using beacons to incorporate location-based tracking in a museum environment, E2i Creative Studio conducted a pilot study using a mobile event application in order to test the feasibility of using an alternate reality game to collect data on the visitors in the physical space. Four hundred users engaged in the app and game, providing researchers with valuable timing and tracking data. From the data collected, this paper informs and provides insights for engaging players in virtual reality through location-based gaming using iBeacons.

Alternate reality games (ARGs) represent the next generation in mobile and social gaming, where a player can be integrated into the game with every step they take in the real world. ARGs combine digital interactions with experiences in the real world, allowing players to participate in a variety of competitive and collaborative activities (Kim et al. 2008). With the growth in presence of Global Positioning System (GPS) tracking and mobile devices, ARGs are becoming increasingly common in the gaming world. For example, games like Pokémon Go (The Pokémon Company 2015) and Ingress (ref) provide large player bases with a virtual world that’s capable of being explored through the physical world. ARGs keep players involved over time through their dynamic nature; game content is constantly changed or updated as players all over the world solve puzzles, tell stories, and launch attacks (Kim et al. 2008).

iBeacon is a protocol developed by Apple, used in various iBeacon-compatible Bluetooth Low Energy (BLE) devices, typically called beacons. Beacons are commonly small devices, about one to two inches in diameter. When these devices come into the general area of a user’s phone or Bluetooth-enabled device (assuming the user has given the app permission to use iBeacons), they prompt a notification to the user’s mobile device. This looks like a basic notification on someone’s phone that may be tailored to the specific application. iBeacons are currently being used for a variety of applications, including gaming, data collection, and increasing engagement of visitors in public spaces such as libraries and museums (Eng 2015).

Despite the effectiveness of GPS in alternate reality games for worldwide gameplay, GPS cannot provide gameplay in micro-environments such as a specific room, building, or area. Instead, beacons can provide the ability for an indoor-positioning system in smaller environments such as these. Developers have the ability to place a beacon anywhere considering their small size and wireless portability and adjust their transmission range programmatically. For example, Estimote, a popular beacon manufacturer, states that range of their transmission is up to 70 meters, with four possible proximity zones ranging from 0.5 meters to 70 meters in diameter (Estimote 2014). Game developers and other content creators can utilize this flexibility in their designs to trigger events at specific locations in the physical world through mobile applications. According to the Internet of Things, the world of mobile devices, sensors, and connected hardware is ever growing, with 9 billion interconnected devices in 2013 and an expected forecast of 24 billion interconnected devices by 2020 (Gubbi et al. 2013), allowing for an expansion of a mobile audience and gaming consumers.

The design for ARG location-based games has dual layers, involving a virtual environment laid on top of a physical environment. Between location-based gameplay and the networked capability of mobile devices, ARGs can encourage social interactions through community events or player-versus-player (PvP) interactions. For example, Pokémon GO affords player’s interactions through battling and trading Pokémon that they have collected through their exploration of the real world (The Pokémon Company 2015). Developers for ARGs must take into account how their virtual environment will affect physical gameplay, especially in a micro-environment such as a building. Will an influx of users to one physical area create chaos, comprising a player’s safety? While this can create less-than-ideal situations, it can also be used as a tool to drive physical exploration through virtual reality.

In a partnership with the Orlando Science Center (OSC), E2i Creative Studio piloted a mobile AR game in 2016 at Otronicon, an annual technology convention. The project was designed to meet the science center’s need for a mobile event application; OSC wanted to provide convention visitors with scheduling information through both Android and iPhone platforms. Additionally, E2i’s goal was to automate timing and tracking collection through gameplay. In order to achieve these goals, an event application was developed that contained an alternate reality game. The purpose of the application was not only to provide visitors with information, but also to test the feasibility of driving visitors through the physical environment with an indoor-positioning system built on beacons while collecting timing and tracking data.

Science centers and museums typically collect timing and tracking data on visitors manually, recording quantitative data on where the visitors traveled, as well as how long they remained in the area (Yalowitz and Bronnenkant 2009). Automating the data collection process can allow for the capture of exponentially more data, and assist live observers to delve deeper into emerging patterns, and allow for more efficient data visualizations and mapping based on the accuracy of beacons inside the building. With over 15,000 visitors to the science center during the event, and over 560 users downloading the pilot application, %3.7 of users downloaded the application during the weekend long event. With the application not being marketed or publicized before the event, the pilot of the event application was proven to be a viable tool for data collection based on the amount of downloads.

Deep Sea Discovery utilizes a RadBeacon Dot, a beacon created by Radius networks (Radius Networks 2016). These specific beacons were chosen based on their price, and the ability to replace the battery inside. The size of the beacons allow for flexibility when installing, with the diameter of the beacon being about the size of a quarter (Fig. 1).

Deep Sea Discovery, the alternate reality game developed and piloted within the event application by E2i, is a monster collection game that utilizes beacon technology. The game allows players to use the Orlando Science Center as a physical platform for exploration of different aquatic zones with the goal to document, collect, and learn about a variety of sea creatures (Fig. 3).

Players discover real-world aquatic creatures with respect to their scientifically accurate aquatic zone. In order to encourage players to explore the area, a unique aquatic zone was assigned to each of the four floors in the OSC building, mimicking the structure of real world aquatic zones:

Six to twelve beacons were installed on each level to notify players of a creature encounter. At each encounter, players have the ability to document a creature, but their effectiveness relies on their level and experience points, in conjunction with the creature’s level, rarity, and sensitivity. Players increase their skills and stats by exploring and documenting various creatures throughout the building.

This section outlines specific mechanics in Deep Sea Discovery in relation to metrics and screen states.

Encountering and Moving Closer to a Creature:

If the player encounters a creature they may opt to immediately document it, or move closer to it. The closer the player gets to the creature, the more percentage documentation they can gain, as well as “experience”, raising their skills. A creature may need to be documented multiple times in order to obtain %100 documentation (Fig. 4).

This element acts as a library of what creatures the player has documented. The player starts with an empty CreatureDex, and throughout their exploration and documentation, they collect each creature until they have successfully documented every creature in the game (Fig. 5).

Upon first starting the game, the player starts with an initial Level rating of 1. Document and Approach begin with random values equaling 20 when added.

This stat gives players an overall understanding on how skilled their character is, and how well he/she can fair when attempting to document certain creature. This number is raised when enough Experience Points are gained, which in turn raises the player’s stats. When documenting a creature, this equation is used: Player (Level/Creature’s Rarity*10) + 2+iBeacon Range. Also, when getting close to a creature, the player’s Level will come into play when trying to determine whether the creature has noticed the player. The formula for this is as follows: Distance(limited from 0–100) + Creature’s Sensitivity-Player’s Level.

This indicates on what level the creature can be found in (Epipelagic, Mesopelagic, Bathypelagic and Abyssopelagic).

This is meant to be used as a basic understanding of the creature’s difficulty in relation to the player’s level. To calculate this number, find the average between the creature’s Rarity and Sensitivity.

This represents the creature’s anatomical complexity, and basically how hard it is for the player to document it. This stat is tested against the player’s Level stat (as mentioned below).

This represents the creature’s ability to notice the player. This stat is contested against the player’s Level.

Types of Data Collected from Visitors:

This data is recorded based on the beacons that contacted the user’s device. They are recorded in sequential order of when the user visited them. This is used to track where the player moved in the physical space of the science center by mapping it to a diagram (See Fig. 2.) This allows for analysis of timing and tracking throughout the Orlando Science Center

In order to track player movement, the beacons were labeled and installed throughout the science center, and were mapped out by beacon ID, shown in Fig. 6.

The data collected can be analyzed by plotting the data points corresponding to each beacon on the prepared maps. This gives a visual representation of visitor tracking. Analysis for this type of visualization can be completed at a glance, seeing where exactly traffic patterns exist based on the clusters of data points as well as the congestion of lines of travel.

This timing and tracking data is important not only to inform design choice in alternate reality gameplay, but for museum management to analyze which exhibits are being visited and how long visitors are engaged in the exhibit. The analysis of timing and tracking data makes it possible to streamline and better design engaging visitor experience, and informs the design of efficient and popular exhibits that maximize not only the amount of visitors, but the engagement of each person visiting.

This application allowed E2i Creative Studio to pilot an effective design tool using an emerging technology, but there is still a lot of exploration available in location-based gaming using iBeacons. Beacons are not widely known throughout gaming and simulation, and companies like The Pokemon Company and Niantic are just recently beginning to produce games in the ARG realm.

The data is valuable to a variety of different stakeholders, not only limited to science centers, museums, and developers. Any entity, building, or organization could utilize indoor positional data based on visitor’s, or even employee’s travel and location. Theme parks have started implementing beacons in order to create more immersive applications and experiences. Holland’s Tulpenland utilizes beacons in order to send educational data to user’s phones on their attractions (RFID Journal 2015). Parks can benefit from the tracking data the same way museums and science centers can, while also allowing their visitors to benefit from the experience.

The minor amount of games available and the infancy of the adoption of iBeacon hardware allows for much further exploration to be completed. One facet includes game or application manipulation through data. Design and mechanics could be altered based on one player’s input or location. How can we use the data from yesterday to affect today’s experience?

This emerging technology is a powerful tool for design and data collection, and E2i Creative Studio sees the benefit of analyzing positional data to inform design. There is a world of experimentation and possibilities in location-based design and development using indoor positional data. The lab looks forward to exploring the capabilities of alternate reality and location-based tracking with beacon technology in future work and applications.