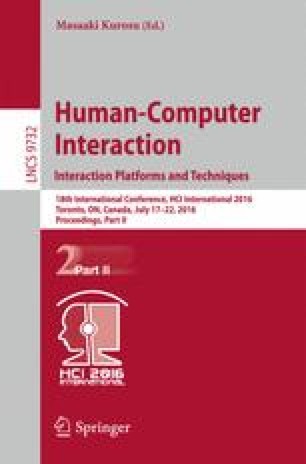 Our idea to address the above issue was prompted by a previous solution and research. The user of a one-handed keyboard (e.g., Twiddler Tek Gear Inc.) uses a belt to hold the keyboard stably. Fukatsu et al. [4] and Corsten et al. [5] showed that the pointing accuracy in eyes-free touch input is improved by tactile landmarks on the back of the device. These solutions and research results suggest that the back of a device presents potential design space for improving the performance of the input via the touch screen located on the front of a mobile device.

Our idea in this research is to use a ring-shaped part, e.g., VENICEN Ring Holder2, on the back of a device to prevent the device from falling(hereafter, a holding ring). Our assumption was that attaching a holding ring would be able to improve the eyes-free pointing accuracy during one-handed operation (Fig. 1), because the user’s gripping attitude is stabilized. In this research, we conducted user studies to measure the eyes-free pointing accuracy, using mobile devices to which a holding ring is attached in different positions to examine the above idea.

Previous research showed that touch-enabling the back of a touch screen device improves the usability of the device. For example, Baudisch et al. [6] showed that touch-enabling the back of an ultra-small device improved the pointing accuracy on the front side. Wigdor et al. [7] proposed a tabletop system of which the back is touch-enabled, and which extended input vocabulary by detecting touch on the back of the table. LucidTouch [8] is a see-through mobile device which has touch sensors on its back. It improves the pointing accuracy and the usability of text entry on the front side because the see-through device allows the user to see the user’s fingers and hand on the back of the device; it also showed bimanual input techniques which coordinately use the front and back.

Pointing accuracy in eyes-free touch input was shown to improve by tactile landmarks on the back of the device. For example, HaptiCase [5] provides back-of-device tactile landmarks that the user senses with their fingers to estimate the location of touch at the front, and thus allows the user to touch with high precision under the eyes-free condition. Fukatsu et al. [4] showed that tactile textures attached on the back of the device can improve pointing accuracy.

In contrast to the above research, we explore the effect of attaching a holding ring to the back of the device for eyes-free touch input.

Some research proposed eyes-free input methods. For example, Slide Rule [9] is a method that allows blind users to access touch screen applications in eyes-free by using voice guidance along with multi-touch interaction techniques. A user study with 10 blind people showed that Slide Rule was faster than a system based on a screen reader and participants preferred Slide Rule. BrailleTouch [10] is a method that allows users to input text in an eyes-free manner. It shows a Braille cell, which consists of a 3 by 2 binary matrix on the touch screen of a mobile touch screen device; where the user places their fingers in a one-to-one correspondence to a standard Braillewriter to input a character. Bragdon et al. [11] investigated the effect of various situations on touch screen interaction. One of the investigated situations was an eyes-free environment. As a result, these authors suggested that, in terms of performance, the most notable effect for touch screen interaction came from not looking at all times. Gustafson et al. [12] proposed palm-based imaginary interfaces that use a human palm as input surface mapped to an invisible GUI based upon the user’s spatial memory such as the home screen GUI of a smartphone. They investigated pointing time under sighted and blindfolded conditions. Their results indicated the potential of imaginary interfaces for blind and eyes-free use.

In contrast to the above research, we focus on improving the accuracy of eyes-free input by attaching a holding ring.

It is possible to improve pointing accuracy using tactile feedback. FingerFlux [13] is an output technique to generate near-surface haptic feedback by magnets. The technique can reduce drifting when operating on-screen targets in eyes-free condition. Kincaid [14] proposed tactile guide overlays for touch screens. An overlay is a transparent Lexan sheet cut and hollowed out to fit the buttons, sliders, and other components on touch screens. An evaluation shows that a tactile guide overlay can decrease task time compared to a bare touch screen. Touchplates [15] is an overlay for touch screens designed for accessibility. El-Glaly et al. [16] proposed augmenting a touch screen with a tactile overlay that consists of a border, a vertical ruler, horizontal lines, vertical lines, or landmarks. MudPad [17] is a system that can provide localized active haptic feedback on multitouch screens. This allows users to explore the interface haptically.

Various kinds of tactile feedback other than the above ones have been explored in the HCI field. For example, TeslaTouch [18] produces various kinds of tactile sensations by controlling electrostatic friction between a touch surface and the user’s fingers by exploiting the principle of electrovibration. UltraHaptics [19] is multi-point midair haptic feedback for touch surfaces radiated using a phased array of ultrasonic transducers. BaduumTouch [20] is an attractive force feedback interface using air suction.

In contrast to the above research, we use tactile feedback in the form of a holding ring attached to the back of a mobile device and to explore how the feedback affects the eyes-free pointing accuracy on the touch screen.

We conducted a user study to measure pointing accuracy using mobile devices with a holding ring attached in different positions.

Participants. Six male participants including three of the authors ranging in age from 22 to 24 took part in the evaluation as volunteers. They were using mobile devices with touch screens on a daily basis. All participants were right-handed.

The screen of the mobile device, which is split into a 4\(\, \times \, 4\) or 5\( \, \times \, 5\) grid (split conditions) as shown in Fig. 4, was mirrored on the display. As a trial, a gray rectangle (hereafter target) was shown in one of the grids. We asked the participants to point (i.e., tap) the corresponding position on the screen of the mobile device as accurately as possible. Specifically, we also asked the participants to touch down on the touch screen with their finger, move their fingers on the touch screen to find the target, and then raise their fingers from the touch screen. We used the point where the fingers were raised (i.e., the coordinate of the touch up event) for analysis in pointing accuracy.

The following is the procedure according to which a participant carried out the task:

Standard deviation of variances in each split condition.

Table 2 shows the standard deviation of variances in each ring condition. Figure 9 shows the center of gravity of touch point of each target in the 6\( \, \times \, \)6 condition. The result of the additional evaluation shows that there are significant difference between the Top and other conditions. The reason might be the fact that participants are forced to touch some of the targets in unusual postures caused by the holding ring. Especially, when participants touch the lowermost targets in the Top condition, the thumb takes an unusual posture. On the other hand, the variance at the Bottom condition is lower than the variance at the Top condition because the thumb can touch the uppermost targets just by reaching out the thumb when participants touch them in the Bottom condition. In summary, since this additional evaluation shows no significant difference between the four ring conditions in 6\(\, \times \, \)6 while the pointing accuracy is improved in the Top and Bottom condition in 5\(\, \times \, \)5 in this first evaluation, it is considered that the holding ring has the potential to improve the pointing accuracy when the target size is approximately 15.4 mm \(\times \) 10.4 mm (i.e., 5\(\, \times \,\)5).
Table 2.