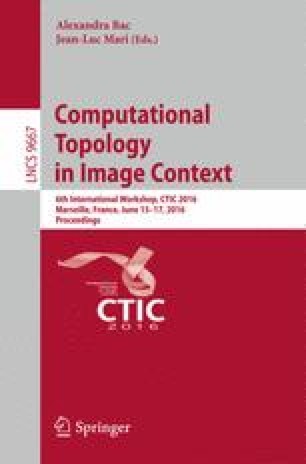 On Some Local Topological Properties of Naive Discrete Sphere

Discretization of sphere in the integer space follows a particular discretization scheme, which, in principle, conforms to some topological model. This eventually gives rise to interesting topological properties of a discrete spherical surface, which need to be investigated for its analytical characterization. This paper presents some novel results on the local topological properties of the naive model of discrete sphere. They follow from the bijection of each quadraginta octant of naive sphere with its projection map called f -map on the corresponding functional plane and from the characterization of certain jumps in the f-map. As an application, we have shown how these properties can be used in designing an efficient reconstruction algorithm for a naive spherical surface from an input voxel set when it is sparse or noisy.

Sphere is one of the important geometric primitives. It finds numerous applications in different areas of science and engineering, starting from the age-old manufacturing industry and ending at today’s rapid prototyping and 3D imaging. Being non-linear, its discretization in the integer space remains a well-studied research problem, since the topological properties like gap-freeness, tunnel-freeness, tiling, surface connectivity, and minimality are associated with it [1, 2, 5, 9, 10, 13, 21, 23, 26].

For reconstruction of 2D/3D discrete objects, several techniques can be found in the literature [16, 20]. Since formulation of an appropriate topology ensures well-composed discrete sets [19], topological properties are used in many techniques to repair/reconstruct discrete surfaces [11, 15, 18, 22, 24, 25]. However, all the existing works are related either with discrete triangulated objects in the Euclidean space or with general voxelized surfaces. To the best of our knowledge, there is no existing work related with topological properties of a specific voxelized surface such as sphere. In this paper, we present the first study on some local topological properties of (naive) discrete sphere and show an interesting application of these properties for reconstruction of a spherical surface.

Reconstruction of a discrete object, such as sphere, is a pertinent problem in 3D imaging and allied areas. In this paper, we derive and analyze some of the local topological properties of discrete sphere that provide some insights about its composition and can be used for related applications such as spherical surface reconstruction.

At this point, it is worth mentioning that among the different models of discrete sphere, the naive sphere contains the minimum number of voxels ensuring the separability of its interior and exterior. Hence, it is a subset of any other valid model of discrete sphere [5]. Further, in topological terms, it is 2-minimal and marked by its readiness to decomposition in separate parts based on functional plane [6]. These unique points of naive sphere make us choose it as our model of study.

We first analyze the basic properties of a naive spherical surface. From these basic properties, we derive its other local topological properties. Since a naive sphere is 48-symmetric and each of its quadraginta octants (q-octants, in short) has a unique functional plane [5, 6], we use, w.l.o.g., the projection of its 1st q-octant on its functional plane (i.e., xy-plane). We call this projection as f-map and analyze it for studying the topology in \(3\times 3\) neighborhood.

Figure 1 shows an input f-map and the reconstructed f-map by our algorithm along with the corresponding naive spherical surface in 3D. In the result, each yellow voxel definitely belongs to the naive sphere and hence called a definite voxel. Each blue voxel, on the other hand, is a semi-definite voxel, as itself or its 2-adjacent voxel with a higher z-value belongs to the naive sphere. In this example, there are 41 voxels in the initial set (taken randomly from a naive sphere of radius 30). Our algorithm is able to reconstruct 57 definite and 54 semi-definite voxels for this surface. In practice, especially when the input voxel set is not sparse, our algorithm runs in a time linear in the area of the reconstructed surface. This is one of its strong points in comparison with other reconstruction algorithms that are mostly based on Hough transform.

In this section, we explain some fundamental concepts, and fix some basic notions, notations, and definitions to be used in the sequel. For more details, we refer to [17].

For \(l\in \{0,1,2\}\), an l-path in a 3D discrete object A (or the discrete space \({\mathbb {Z}}^3\)) is a sequence of voxels from A such that every two consecutive voxels are l-adjacent. The object A is said to be l-connected if there is an l-path connecting any two points of A. An l-component is a maximal l-connected subset of A.

3 Naive Sphere and Its Topological Properties

There are several models of discrete sphere and hypersphere, which are built with different topological constraints; see, for example, [14, 26], and the references therein. Our work is focused on the naive model of discrete sphere [2]. A naive sphere \(S(r)\) is a 2-minimal set of 3D integer points (equivalently, voxels) such that \(\max \{d_{\perp }(p,{\mathsf {S}}(r)):p\in S(r)\}\) is minimized. Here \({\mathsf {S}}(r)\) denotes a real sphere of radius r, considered as a positive integer in our work. Also, its center is an integer point, which is taken as (0, 0, 0) for simplicity and without loss of generality.

In this section, we put forward some interesting properties characterizing the local neighborhood of a voxel in a naive sphere. First, we explain some basic properties and then we derive some additional properties from the basic ones. These properties are later used for efficient reconstruction of a sparse or noisy voxel set generated from a naive spherical surface.

Each coordinate plane serves as the FP of 16 specific q-octants. Figure 3(c) shows the voxels of q-octants whose FP is the xy-plane. For a detailed analysis on FPs of discrete sphere, we refer to [6].

We define f-map as the projection of a q-octant on its FP. Since the projection is bijective for naive sphere, the f-map, at each pixel position, holds the maximum coordinate value of the corresponding voxel. From now on, we refer to this maximum coordinate as f-coordinate. Figure 4(b) shows an example of the f-map of \(S^{1}(r)\). As xy-plane is the FP of \(S^{1}(r)\), each position of its f-map contains the z-value of the corresponding voxel. The voxels with same z-value form discrete annuli and are shown in alternate colors. We denote the f-map of \(S^{1}(r)\) by \(F^{1}(r)\).

We start with the following theorems on two basic properties of the voxels in the 1st q-octant, which can be generalized for all other octants as well.

Unit increment (decrement) in x- or y-value in \(F^{1}(r)\) results in at most unit decrement (increment) in z-value.

By [4, Theorem 4], the ith circular arc (voxels with \(x=i\)) in \(S^{1}(r)\) forms a 1-connected monotone path with increasing y-value and non-increasing z-value. This ensures the connectivity of each arc corresponding to a column in \(F^{1}(r)\). Similarly, as the naive surface is 2-separating, for a fixed y-value, unit increment in x-value results in at most unit decrement in z-value.    \(\square \)

The z-coordinate induces discrete annuli in \(S^{1}(r)\) (see Fig. 4). The upper and the lower boundaries of the projection of each such annulus in \(F^{1}(r)\) are monotone paths, with increasing x-value and non-increasing y-value from left to right. This owes to the fact that in \(S^{1}(r)\), the x-value at a point does not exceed the y-value. So, a unit increment (decrement) in x-value and a unit decrement (increment) in y-value in \(F^{1}(r)\) points to either the same or the next annulus, whence the result.    \(\square \)

Notice that all three examples in Fig. 5 conform to the above theorem.

For example, in Fig. 5(d), \(\min \{f(N(p))\} = f(p)-2\) at \(p+{\mathsf d}_1\). Note that the above theorem indicates the occurrence of jump that arises in naive planes [8] as well as in naive spheres, as shown recently in [6]. A jump is formed when two voxels are not adjacent on the naive surface but their projections are two 0-adjacent pixels on the functional plane.

The following theorems can be used to get f(p) when a partial information is available in N(p).

In this section, we show how the local topological properties of a naive sphere can be used to reconstruct its surface when holes or noise are present in input data. The input to the algorithm is a set of integer points/voxels belonging to the first q-octant of a naive spherical surface. We have also assumed that N(p) always consists of 9 points, i.e., the points in the input set are all taken from the interior of the q-octant and not from its border. This assumption helps us to also generate semi-definite voxels around the final definite point set of the reconstructed naive set.

Note that, while generating the definite voxels to fill the gaps appearing in the input surface, only Theorems 6 to 8 are used, as these are the only ones which can definitely predict f(p). Few of the other properties are used to predict the semi-definite voxels after generation of the final definite result set, and can also be used to detect noisy voxels in the input set. The steps of the reconstruction algorithm are as follows.

Each iteration of this algorithm scans through the entire f-map to detect empty locations, i.e., it scans through total \((n+m)\) number of points, where n is the number of points in the input set, and m is the number of empty locations in the f-map. Inclusion of definite voxels at each stage helps to predict the values for undefined voxels in the next stage; and in the worst case, the holes may be interconnected in such a way that each iteration is able to produce only one definite voxel. Therefore, the number of iterations depends on the configuration, size, and shape of the hole regions. The time complexity of the algorithm therefore varies from \(O(n+m)\) in the best case to \(O((n+m)m)\) in the worst case. However, as we have experimented, the number of iterations in practice is low and the algorithm stops after a small number of iterations, thus practically giving us a linear time complexity when m is in the order of n / 2 or less.

In the above-stated experimentation, we have assumed that the input set of points belongs to a particular q-octant and all definitely belong to a naive sphere whose radius and center are not known. As the properties stated in the previous section can easily be generalized to work for other q-octants as well, a set of points from different q-octants of a naive sphere can be partitioned by their corresponding functional planes. This can be done by analyzing the projections on the three coordinate planes. After partitioning by functional planes, each part can be used for reconstruction based on the local topological properties and their corresponding f-maps.

We have run the algorithm for multiple input instances and found encouraging results. Figure 6 shows us how the algorithm reconstructs the input surface step by step. In this example, the input surface contains 145 voxels, all of which belongs to a particular naive sphere. After six iterations, our algorithm is able to reconstruct the surface as in Fig. 6(f), which contains 269 definite voxels and 115 semi-definite voxels. Another result shown in Fig. 7 presents how the local topological properties can effectively be used to discard noisy voxels and restore the correct ones to reconstruct a naive spherical surface.

We have studied various local properties of naive sphere and have demonstrated a method to utilize these properties for reconstruction of a naive spherical surface containing missing voxels. One point to note is that these properties are not supposed to work while the input data is very sparse and we are not able to find any local neighbors of the holes. In that case, some different methodologies like Hough transform can be employed. Nevertheless, local topological properties in larger neighborhoods may yield better scope for reconstruction, which we foresee interesting and challenging in continuation of the proposed work. Further, these local properties of naive sphere, as stated in this paper, may also be compared with local properties of other naive discrete surfaces, e.g., naive plane, for analyzing how they differ across different parameters.