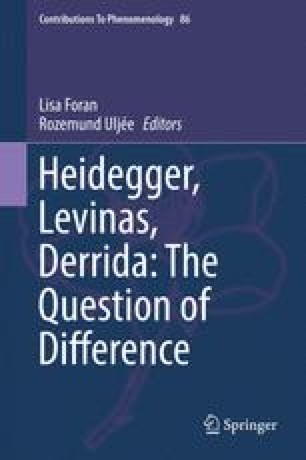 Heidegger, Levinas, Derrida: The Question of Difference pp 17-29 | Cite as

The Future of Deconstruction: Beyond the Impossible

The “…limits of truth” – this passage, retrieved from Diderot’s Essay on the Life of Seneca, opens Jacques Derrida’s Aporias. With this expression, Derrida is not simply placing his reflection under the tutelage of a philosophical heritage, in this case that of Diderot’s and Seneca’s; but also pointing towards the unsettling, ambiguous and equivocal, nature of this tradition. The unsettling nature of this tradition means, as always for Derrida, the aporetic movement which incessantly punctuates any tradition. We shall see that, for Derrida, our own “Western” philosophical tradition– its concepts, motives, intentions and meanings – is always and already engaged in an aporetic movement, never simply resolving or accomplishing itself, never capable of limiting itself to what it manifests or presents itself as. It is thus persistently and incessantly supplementing its ownmost determinations. We must hence assert from the outset of this essay: Derrida does not, as does Hegel or even, to a certain extent, Heidegger, philosophize from a signified endpoint of metaphysical thought or history.

Cite this chapter as:
Cohen J., Zagury-Orly R. (2016) The Future of Deconstruction: Beyond the Impossible. In: Foran L., Uljée R. (eds) Heidegger, Levinas, Derrida: The Question of Difference. Contributions To Phenomenology (In Cooperation with The Center for Advanced Research in Phenomenology), vol 86. Springer, Cham. https://doi.org/10.1007/978-3-319-39232-5_2