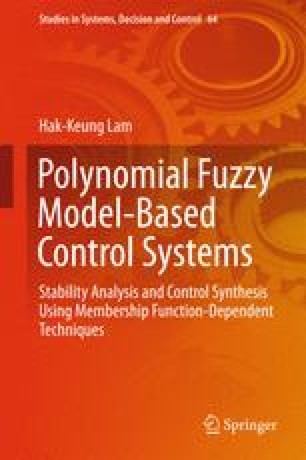 Polynomial Fuzzy Model Fuzzy Controller Sampled-data Output Feedback Input Delay Approach Stability Analysis Results
These keywords were added by machine and not by the authors. This process is experimental and the keywords may be updated as the learning algorithm improves.
Download chapter PDF

Sampled-data control is welcome by a lot of control applications due to the control strategy can be implemented efficiently and flexibly by microcontrollers or digital computers, which are available at low cost nowadays.

Because of the existence of the sampler and ZOH, the sample-and-hold activity introduces discontinuity to the closed-loop system which complicates the system dynamics and makes the stability analysis difficult. Consequently, the existing stability analysis for either continuous/discrete-time FMB control systems cannot be applied.

An SDOF fuzzy controller is introduced to control the nonlinear plant represented by a polynomial fuzzy model using the system output. By connecting the polynomial fuzzy model and SDOF fuzzy controller in a closed-loop as shown in Fig. 8.1, an SDOF PFMB control system is obtained. Its system stability will be investigated based on Lyapunov stability theory through SOS-based analysis.

The output vector \(\mathbf {C}\) is considered to be a constant vector to ease the stability analysis and control design using the properties of ( 7.17) and ( 7.18). When \(\mathbf {C}\) is system state dependent, the analysis will become more complicated.

To proceed with the stability analysis, the constant transformation matrix \(\varvec{\Gamma } \in \mathfrak {R}^{N \times N}\) [41] demonstrating the properties in Lemma  7.1 is considered.

The off-diagonal elements of \(\mathbf {X}_1\) is chosen to be zero matrices to ease the stability analysis for obtaining convex stability conditions.

Collecting the analysis result obtained above, the SDOF PFMB control system (8.10) is asymptotically stable by the satisfaction of \(\mathbf {X}_1 > 0\), \(\mathbf {M} > 0\) and \(\hat{\varvec{\Xi }}_{ij}(\mathbf {x}) < 0\) for all i and j. However, as explained in the previous chapters, MFI stability analysis always leads to conservative stability analysis result as the membership functions are not considered.

The largest sampling period can be obtained by gradually increasing \(h_s\) during solving the solution of the stability conditions until no feasible solution is found.